App Virality Hacks: How Trello and Asana Grew to Millions of Users 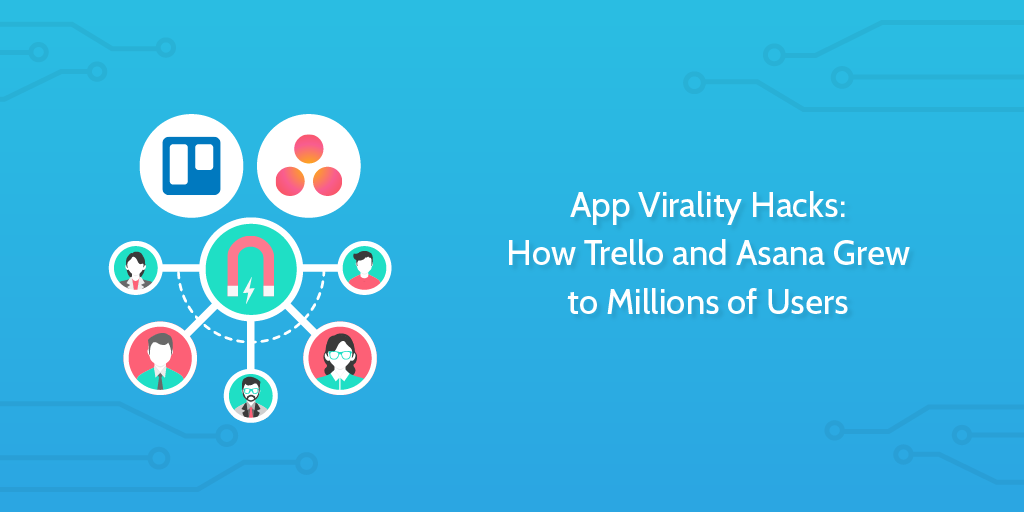 If you’re looking to rapidly grow your user-base by optimizing your product, simply signing up to Trello and Asana will give you a masterclass.

These two apps are optimized for virality because they work best when teams collaborate around them. Here’s how it’s done.

The whole point of project management apps is to give teams a central place to collaborate, update project status and store information. Trello and Asana aren’t particularly useful for individuals, so their product teams put extra effort into getting users to propagate the apps within their own organizations. No marketing required.

Trello and Asana use Yammer’s playbook

A popular example of this app virality tactic was used by Yammer in 2010, rocketing its user base from 1 million to 5 million between 2010 and 2012.

“Yammer is designed in such a way that anyone can sign up for the basic service with their work e-mail, no fees or strings attached. The free plan includes just the basics, so should the new user then want to introduce a more robust experience to their business peers, he will need to upgrade to either the three or five dollar per user per month paid plans.” [emphasis added]

What Jennifer is describing in the above quote is a freemium model to push company-wide adoption and conversion. This isn’t anything new, or specific to Yammer: according to data gathered from GetApp, 33% of project management and collaboration apps use a freemium model. 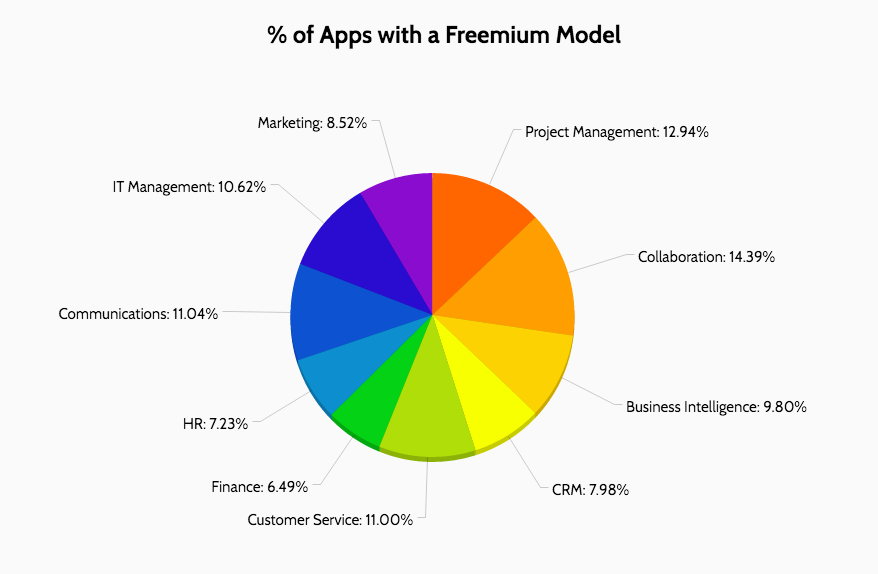 In fact, outside of these two verticals, a freemium model is only used by an average of 21% of companies.

Let’s zoom in on the chart and visualize that. 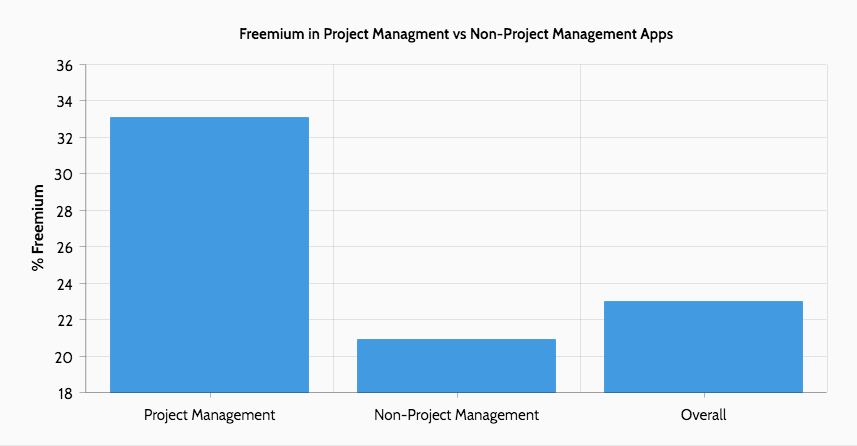 According to this data, it seems that project management and collaboration apps lend themselves better to a freemium model than HR or sales apps. However, the truth is that these apps need more than one person using them to be useful.

A freemium model is a way of reducing friction and encouraging viral adoption within an organization.

In this post, I’m going to take a look at the way two of the biggest project management apps — Trello and Asana — build their freemium products with this in mind, and the tactics they use to spread from individual, to team, to organization.

Asana focuses on growing your team size then pushing for conversion

I went through Asana’s onboarding process with a fine toothcomb this morning, screenshotting every interaction. I set out to write about how Asana onboards new users, but the way the app pushes you towards spreading it to the rest of your team got me thinking…

To make sure Asana keeps the product adoption process as friction-free as possible, it links your work email’s domain to an Asana account and allows anyone with your domain (for example, ben@process.st) to join in without having to link the organization to their account.

Since I already have an account for my @process.st email address, I tried to sign up with my @gmail.com email, to quite a bit of badgering… 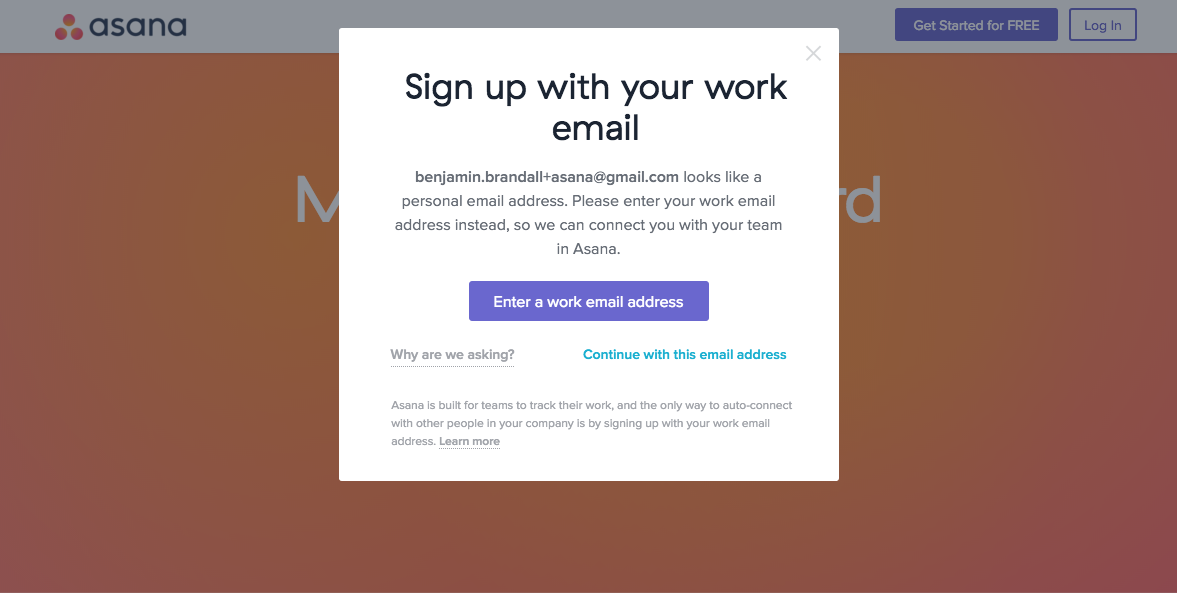 Asana’s intentions are nothing if not clear. They pulled out every copywriting trick in the book on this one.

And, when you confirm your personal email address, further resistance:

The third time’s a charm when it comes to the big ask. 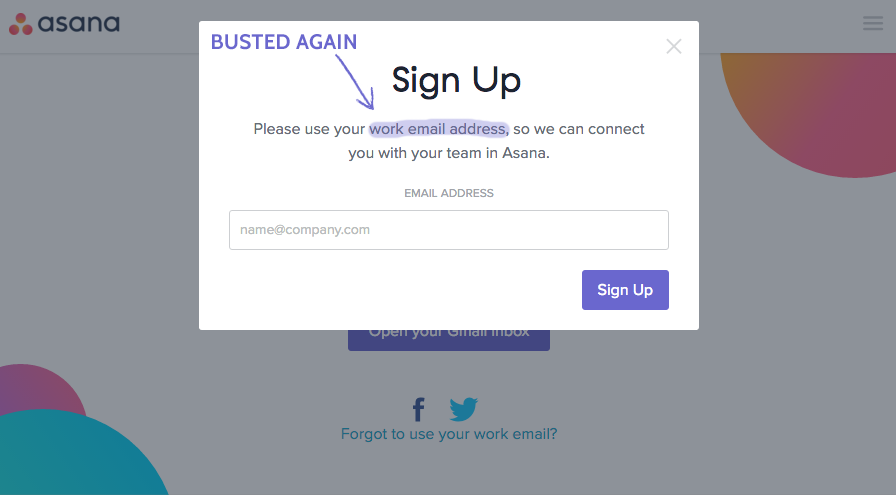 The reasoning here is simple. For example, Chamath Palihapitiya put Facebook on the path to 1 billion users by realizing that their power users mostly had the same thing in common: they made 7 friends in 10 days.

That pattern was identified as a common Aha! Moment for Facebook users. Since Asana works (best, or at all) with teams, the obvious Aha! Moment is inviting the rest of your team to a project for collaboration. It’s only logical Asana tries to push you down that path.

Oh, and even though it reduces friction by letting you sign up with a personal email address, it’s not going to let you get away that easily: 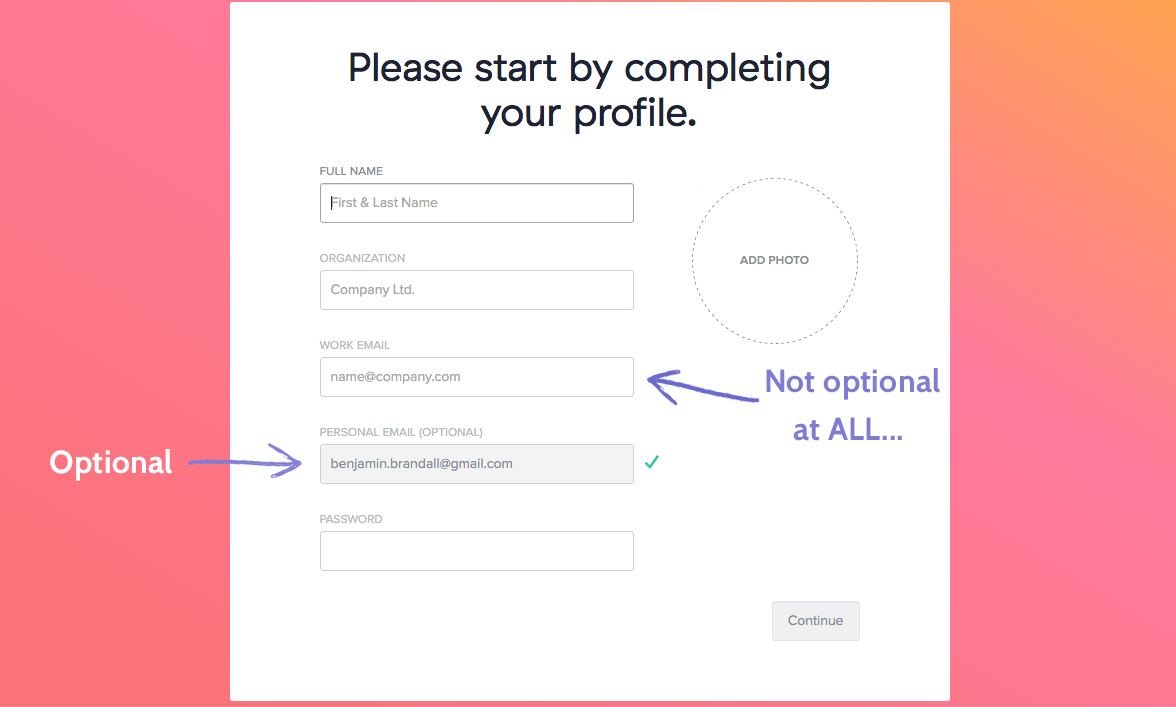 You were warned. Three times, actually. Time to cough up that work email.

Onboarding prompts remind you that the app is no good alone

The first onboarding sequence once you’ve filled that form in prompts you to add your team. 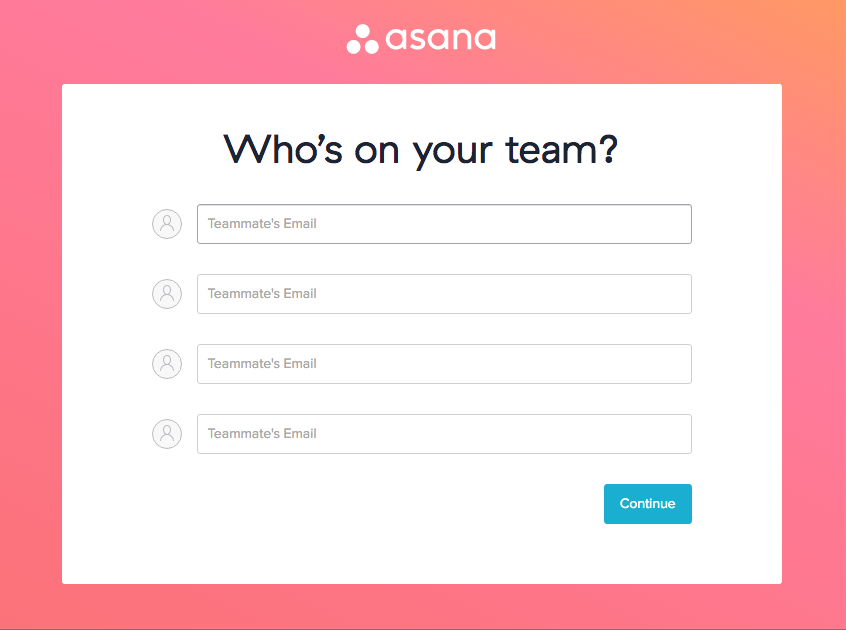 After that, Asana has you creating a project, adding a task and assigning your team.

See below for the push:

As well as the constant reminder that the app needs to be used by a team, you’ve also got those awkward empty portraits on the sidebar, like un-ticked checkboxes. Fill the gaps in your Asana by adding your team.

Not only does adding your team help the with user onboarding (1 user opting out won’t stop the other 20, but if there’s only 1 user to begin with, that’s total abandonment), it pushes you closer to the 15-user-per-organization limit the free plan allows. 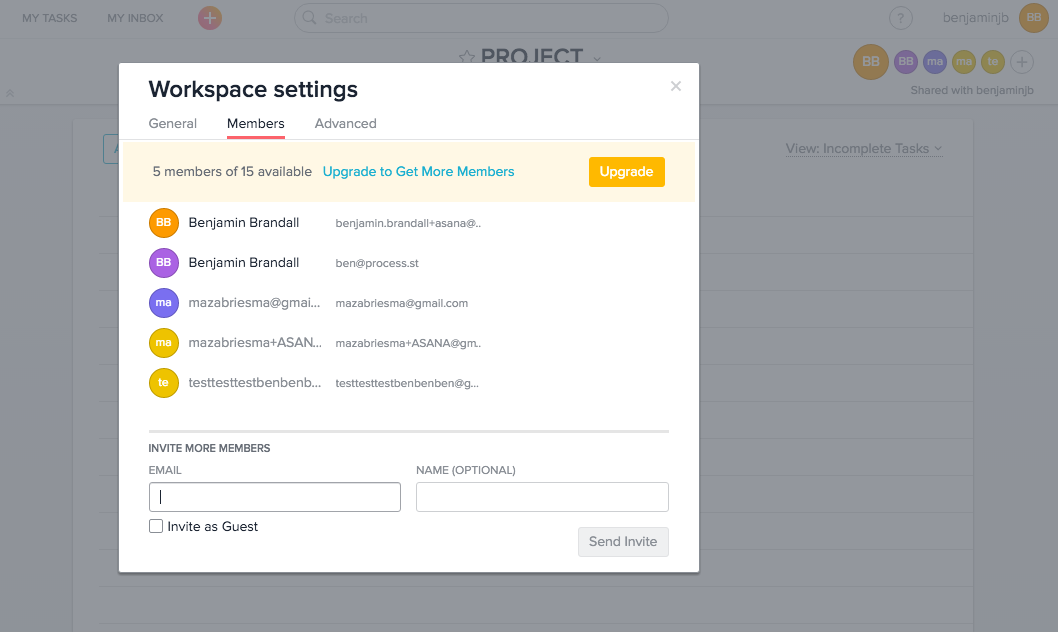 To top it all off, adding your team has to lead to conversion

One Asana account is designed for one whole company. The fact that Asana allows for 15 members before it hits its freemium cap (or lets you buy a minimum of 5 members if you want premium features for a small team) means that all companies worth converting (big ones) will have to convert if the app gains enough internal traction.

When do Asana users convert?

Since the premium version is the only place to get private teams and projects, the 2nd team to join will have to convert. If the marketing team joins up initially, then soon after HR want to join too, there will need to be a degree of privacy between the two teams. A free-for-all won’t cut it.

I spoke with Trello CEO Michael Pryor about how Trello spreads throughout organizations, and his answer wasn’t anything to do with conversion optimization. It was about the simple virtue of having a great product.

“Trello spreads quickly throughout an organization because it has a universal appeal. It maps to the way people work and think in the real world (whiteboards, sticky notes). Once people see how effectively and quickly it puts teams on the same page, Trello quickly becomes the default status report for the entire company” — Michael Pryor

Before September 2015, Trello was entirely free. Since its creation in 2012, Trello has focused on ramping up the user base instead of revenue, because that way — when it eventually turned on revenue — it would have a better chance at making money.

Here’s what Trello creator Joel Spolsky had to say about that back in 2012:

“The business goal for Trello is to ultimately get to 100 million users. That means that our highest priority is removing any obstacles to adoption. Anything that people might use as a reason not to use Trello has to be found and eliminated.” — Joel Spolsky

Thanks to the leeway afforded by running the profitable Fog Creek Software (founded 2000) and Stack Overflow (founded 2008), the early Trello team were able to focus purely on grabbing as many free users as possible. After that, Spolsky says, it’s just a matter of extracting small amounts of money from large amounts of people.

As I said, Trello’s conversion tactics are subtle. It’s possible to use the app without stumbling across restrictions, conversion prompts or even reasons why you should convert.

Here’s how that worked out for me: 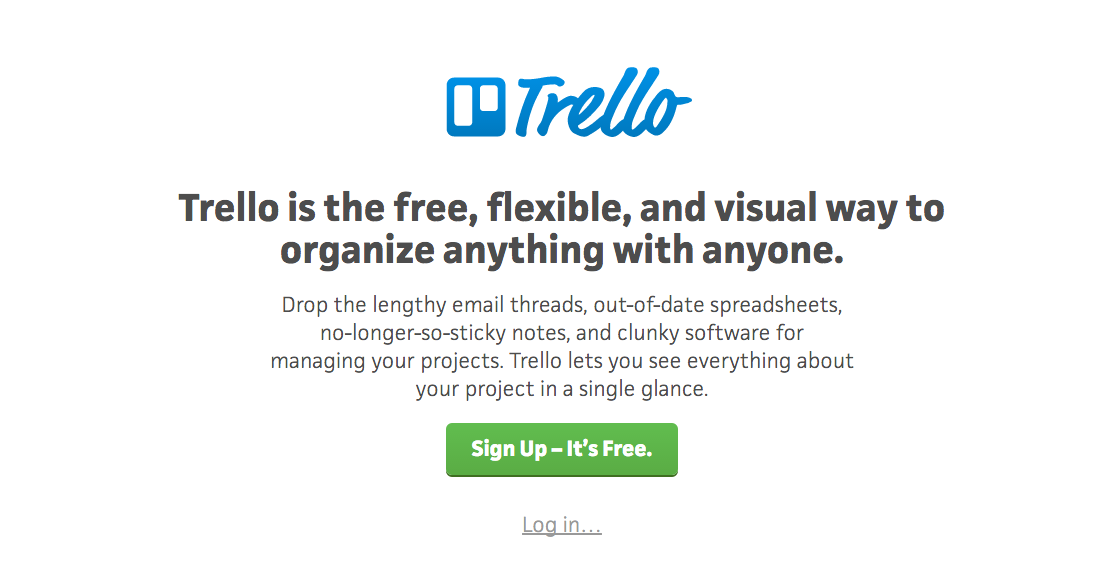 The first point of contact. No pricing page navigation visible, just a prompt to get you to make an account with minimal distractions. Common landing page practice. 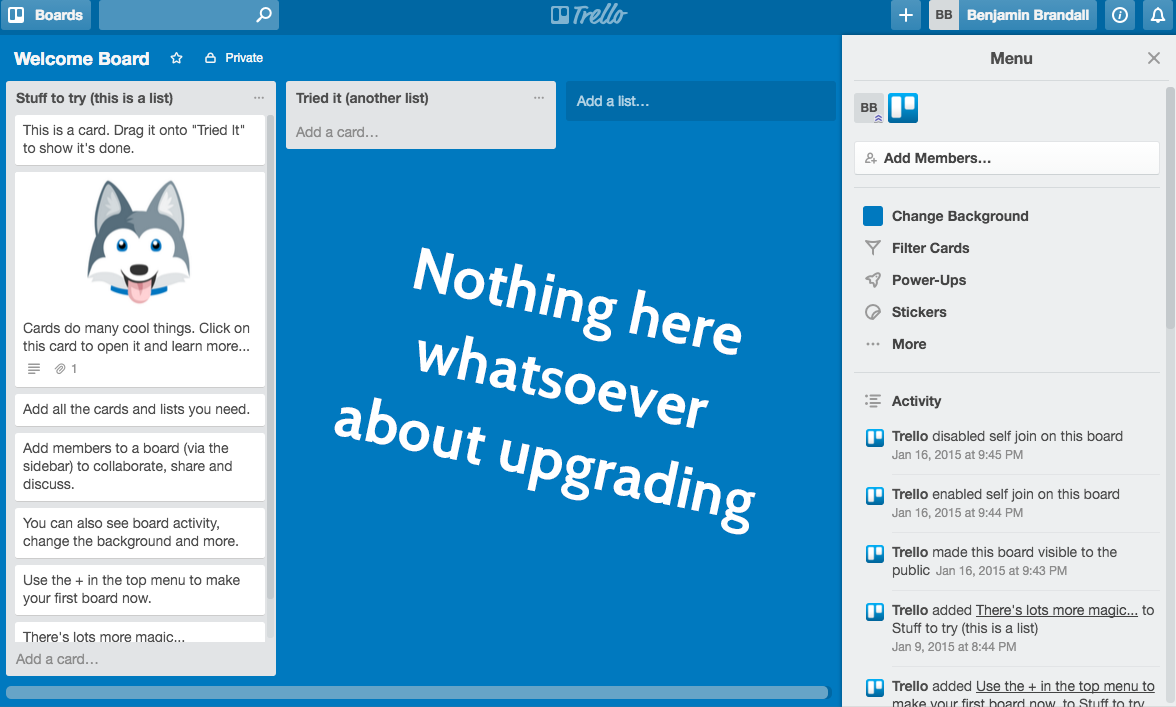 Trello wants me to fall in love with it before bringing an ugly thing like money into the equation. From what I’ve seen so far (the landing page and first-run of the app) there’s no way I could know this app has a premium plan. 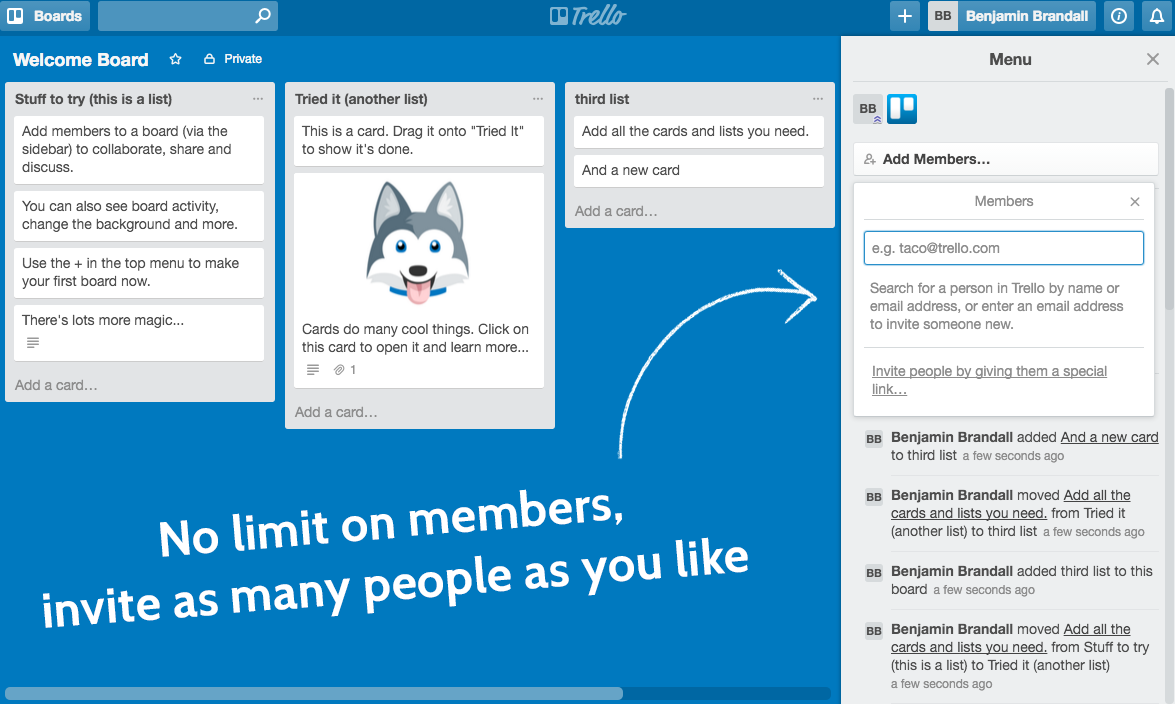 Trello lives from users propagating it within their own teams, so doesn’t put any limit on how many users can be in your organization. The ‘invite people by giving them a special link’ feature is also a great way to reduce invite friction. If you don’t know their email address, you can just Slack them the link. 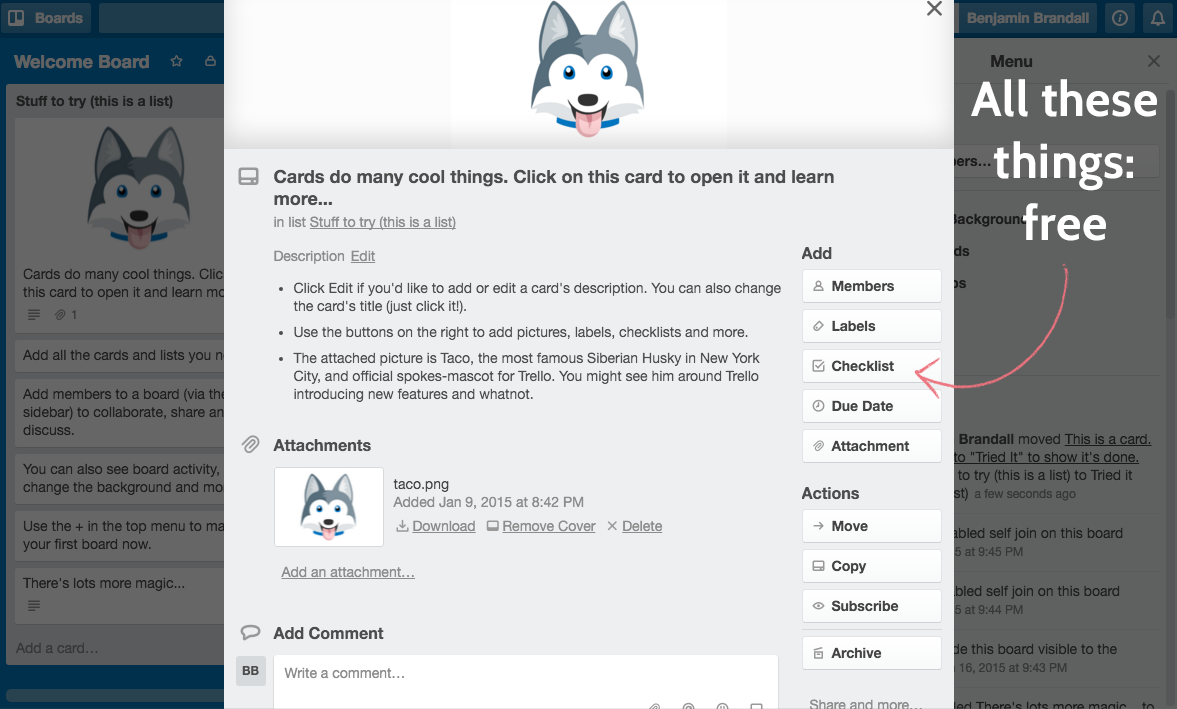 Throughout the onboarding process, (which involves using Trello, not reading a manual) there is no mention of any paid features. Not only do users not know why they’d upgrade, they don’t know they can.

It’s only when you start exploring the sidebar that you see a mention of Gold and Business Class. 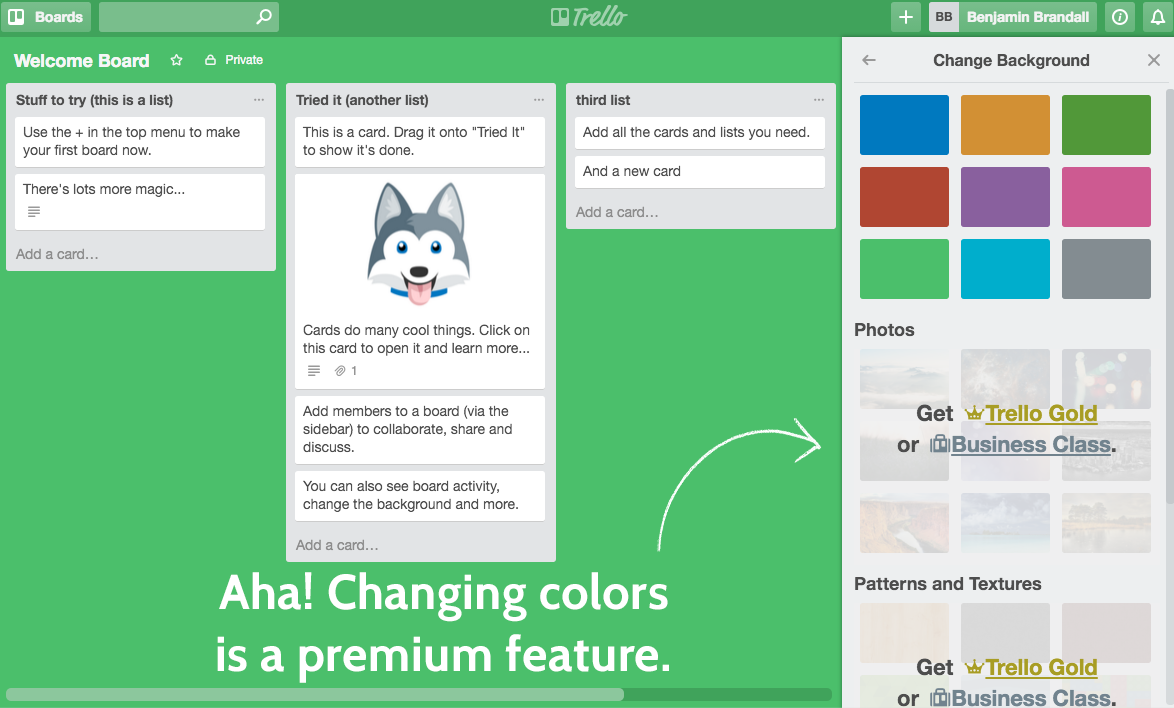 But… Gold? At this point, it’s worth breaking down the differences between Gold and Business Class:

You can get a few aesthetic upgrades and more space for attachments by inviting even more users. While you can pay $5/month for the plan, I’d bet that is more a way of applying perceived value, not an option they’d expect you to go for.

…But Business Class is the real premium plan

Business Class is where Trello makes its money. By spreading through organizations by virtue of being an amazing product, and by incentivising referrals, it grows its free user base to convert a smaller percentage of power users.

It’s interesting to note how the first conversion prompt we get tells us that we can either pay or refer. For a new user, referring instead of paying is the more desirable option, especially when you only want to change backgrounds or cover cards with stickers. 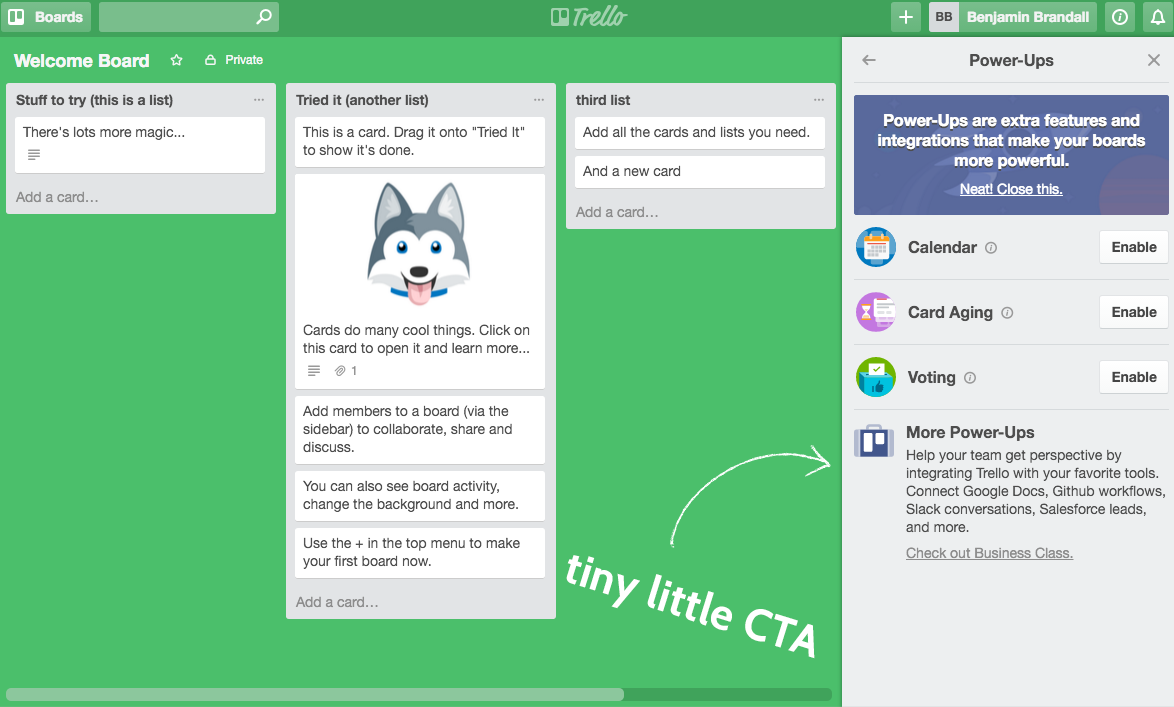 Deep into the sidebar menu, Trello hides its premium Power-ups alongside a few sample free ones. This is an example of how Trello’s Business Class targets power users who are looking for integration to work more effectively with their team.

When do Trello users convert?

The beauty of it is that upgrading happens per team, not per user. Trello focuses on deeply ingraining itself, subtly offering improvements, and then having you upgrade the entire team for them to be useful. But also by not pushing it in your face so you don’t get the impending sense that you’re going to get screwed over as soon as you want to do something more powerful.

A lift in adoption is a lift in conversions & virality

Looking at apps like Trello and Asana — designed for teams — the more team members use the app, the more likely that the power users in the group will be pushing for conversion. That goes for both apps:

When conversion happens, it doesn’t happen 1-by-1, it happens on a whole-team basis.

…then the HR team overhear about a cool new tool being used by Accounting… and the whole process starts again.

Great article. a bit biased towards trello, but love it anyways. Thumbs up!

So I found this article as I create the client fulfillment workflow for our company. Trello is great but it seems perfect for tasks/goals that go through several stages. This was a close comparison in the past.. Now that Asana introduced the board type projects as an option, I ended up choosing Asana… and integrate it in many ways with other apps using Zapier. Haven’t tried connecting Asana and Trello though lol. Thanks for this article!