Productivity at Work: How to Cut Your Week In Half 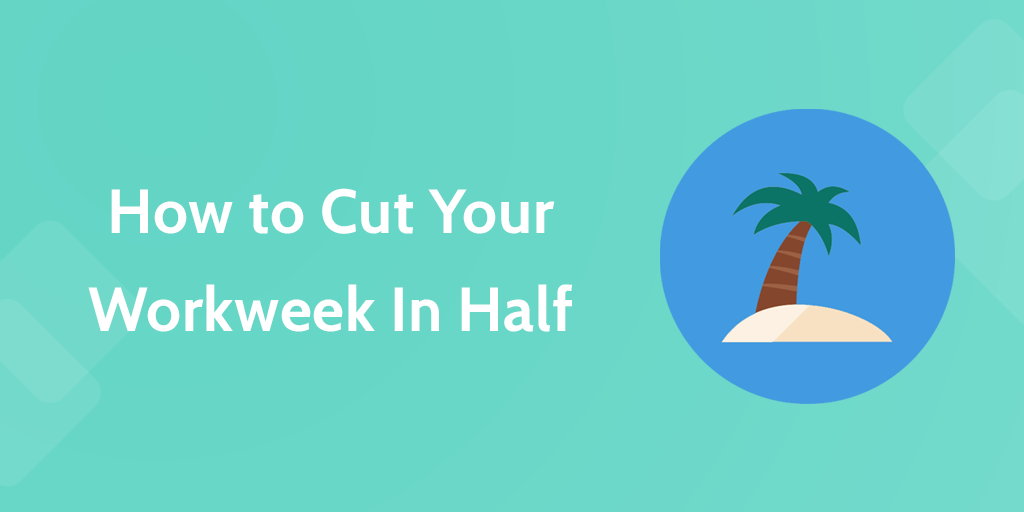 Everyone on the 9-5 grind fantasizes about working fewer hours. It’s one reason why Tim Ferriss’ The 4-hour Workweek shot to the top of the bestseller list when it came out in 2007. It offered people a chance to live the dream.

So why isn’t everyone doing it today?

The 4-hour Workweek is irresistible. But despite the catchy title, Ferriss’ point isn’t even really about working four hours versus 40. It’s about adopting a radically different approach to work that’s alien to the majority of people. 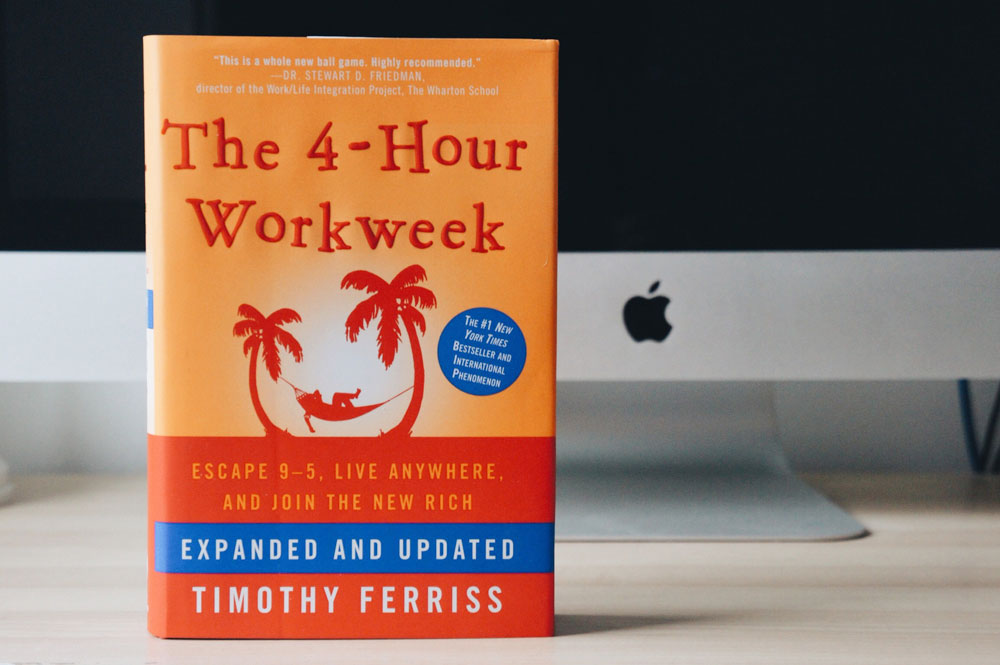 Here’s the thing: most people don’t use their 40-hour workweek to accomplish as much as they possibly could. They go to a couple meetings, check their email over and over, procrastinate—and somewhere in between, they find time to get a little work done. They figure, “Hey, I put in my eight hours today,” but don’t think about whether they’re using that eight hours to meet goals efficiently.

Ferriss’ system demands you prioritize output instead of hours. It requires you to eliminate wasted time, squeeze every possible ounce of productivity from each hour you put in, and constantly ask yourself, “is what I’m doing right now helping me reach my goals?” While most people go through the workweek on cruise control, Ferriss’ strategies turn you into a highly-focused laser beam of productivity.

Most people will never work just four hours a week. But we’ve come up with the strategies and tools for anyone to tap into Ferriss’ DEAL system—Define, Eliminate, Automate, Liberate— to become more productive and drastically cut down their workweek.

You might think that high-powered entrepreneurs get up in the morning and hit the ground running, and dreaming up the next Hyperloop. After all, there’s no time to rest when you’re growing a company from scratch, right?

But we actually found that SaaS startup CEOs like Jimmy Jacobson of Wediges and Chris Savage of Wistia start each day by methodically outlining and prioritizing the goals they want to get done.

Too many people get tripped up by immediately diving into tasks without thinking about their goals. They mindlessly move through their workload without any sense of how they’re progressing to their desired results. Instead, you need to lay out the goals you need to attain and then figure out the tasks that will lead you there.

Here are three simple but powerful strategies to define the goals for your soon-to-be-shortened workweek.

It’s basic math. By reducing your workload to the goals that actually matter and giving yourself tough deadlines, you’re guaranteed to do more with fewer hours.

Most people hear “4-hour Workweek” and think, “How is that possible? I can barely get all my work done in 40 hours.” But between unnecessary meetings, banal emails, and idle water cooler talk, they aren’t actually using those hours effectively.

They don’t realize it, but most people fall prey to the 80/20 principle, meaning 80% of their results come from just 20% of the time they put in. So in a typical 40-hour week, they’re highly productive for about eight hours and spend the other 32 on on distractions.

It’s tough because those distractions can feel like important work. But these tricks can help you separate the wheat from the chaff and eliminate menial time-wasters.

Beating the 80/20 rule looks a lot like natural selection. Eliminate the 80% of tasks that don’t get you anywhere, and multiply your efforts on the 20% that do. 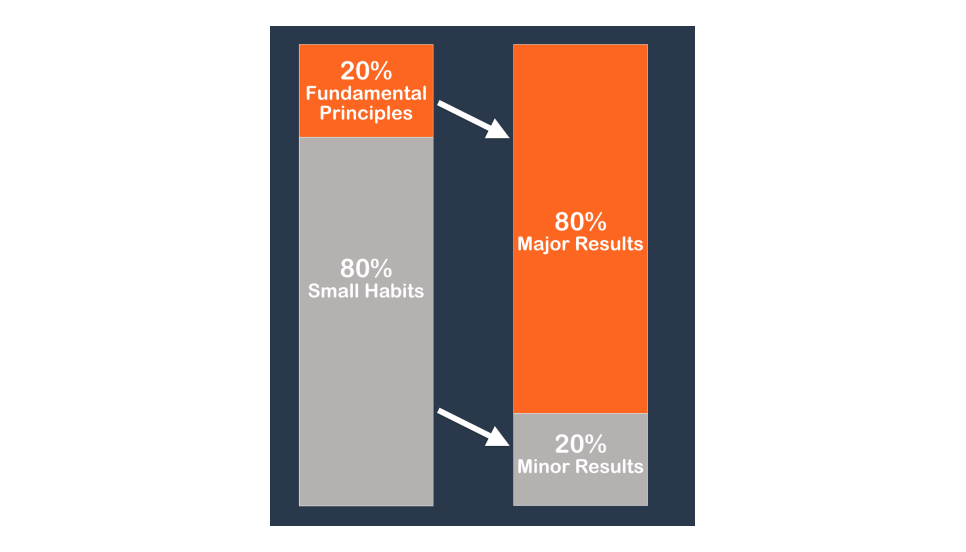 Workflow automation tools let you outsource tedious but necessary tasks to someone—or something—else. They’re widely available and can save a ton of time, but only if you use them correctly.

For an overview of two major players, check out our review of Zapier vs IFTTT.

Too many so-called productivity tools end up making people less efficient. The Wall Street Journal points the finger at apps that, for example, force users to tag every phone call, email, or to-do list item with a project category. That just creates extra tasks that cripple productivity.

As cognitive psychologist Paul Atchley points out, you lose 15 minutes of productivity every time you have to switch back and forth from your primary activity. That means if a tool interrupts your work, and you use it four times a day, that’s a whole hour down the drain.

Below are three ways to integrate tools into your normal workflow and take stuff off your plate rather than add to it.

The best part about automation is that new tools are coming out every day. Keep on top of all the latest trends and always look for new technologies to help you work smarter.

Liberate Yourself and Get Even Better

At the end of the day, The 4-hour Workweek strategy is about improving yourself and becoming actively engaged in your work. In many ways, shortening your workweek isn’t so much the goal of the process as it is a side-effect of becoming more productive—there’s no need to work all those hours if you’re getting 4x as much done as the next person over.

So if you successfully cut your workweek in half, congratulations! But don’t sell yourself short and stop improving now. Put your newfound free time to grow your productivity further. Consider these three ideas to advance further.

The possibilities are endless. That’s the beauty of cutting your workweek in half. You can devote that extra time to anything you want.

It’s Not Just About Output

Reading The 4-hour Workweek changed my life. It inspired me to start my first e-commerce business and move to Thailand, where I lived comfortably off the profits for a year.

But reaping the benefits of Ferriss’ book doesn’t require you to transplant yourself to a foreign country.

When you prioritize output over time, you feel a sense of ownership because you’re actively working toward a specific set of goals—goals you identify as important—instead of passively finding ways to fill a pre-determined number of hours. Psychologists have identified that sense of ownership as one of the most powerful drivers not just of productivity, but also high levels of engagement and satisfaction in the workplace.

You’re welcome Jeff, thanks for reading 🙂

I loved the book too, Vinay. The concept which stayed with me most was ‘There is nothing called Time management. It’s all about task management.’

Having workflow automation tools is great, but those notifications are counter-productive IMHO. That they eventually make us multitask, like Dharmesh Shah and Samuel Hulick have written. I’ve found that tools like SelfControl and Rescue Time improve my productivity.

While it’s extremely difficult to implement all of Tim Ferriss’ suggestions in the book, implementing even 40 percent of them will bring our workweek down by half. Thanks for the insights.

Hi Vishal, thanks for your feedback. I agree that notification overload can make you less productive for sure, altho it does depend on your role. If your role is very reactionary and requires you to jump on new items as they come in (such as sales or support) the notifications can be very useful.

Otherwise, I prefer my tasks to stack into a processing queue, then I use my calendar to block out time to process those different lists – Inbox by Gmail, Any.do and Close.io all do these well.

That task-snoozing post was so awesome, still recommending it to others!

Indeed an informative article. I often concentrate on tasks instead of Goal. Of course, I do important task first. Syed Balkhi has a great post on task management. Probably, this is what we need.

I often switch off social networking sites, mobile and lock myself in a cabin to get the important and tedious work done.

Thanks Jeff, haha a cabin, I love it!

Thanks Ramin, and you’re very welcome 🙂

This is such a great read! Definitely looking forward to implementing the 80/20 rule!
Thanks!

Awesome, hope it works out for you

Great post, Vinay. I often wondered how you have all the time in the world to produce so much content that are so valuable. Now I know 😉

Haha, its all about having solid processes 😉

Nice Article. The 4hour work week is a cool guide for growth hacking.

Great write up and thanks for sharing, Vinay.

is that gif from Dexter’s Lab?

Glad to hear you enjoyed it Anvar

Great post on work productivity. I feel that in the current times when we are mostly working from home, we are working but lacking in productivity. This might be because we are used to that workplace environment. From this post, I picked the idea of setting deadlines for the must-haves because I think I am missing the important things and need to manage them first. Thank you for the post!

Clear communication of priorities and deadlines in remote work is definitely important! Best of luck!