They’re stuffy, dull, and aren’t optimized for human beings to read. No one opts to pop a mid-morning sleeping pill at their desk, but diving into your library of internal documents is probably about as soporific.

There’s no shortage of data on the importance of visuals and how to write content that gets read, but when it comes to internal documents, it’s naively accepted that they can be incomprehensible, unappealing walls of text.

However, with emoji, processes can be clear, memorable, and visually appealing. Here’s a basic example in Process Street using Kurt Braget’s PILLARS system, combined with Emojipoint (another system of his): 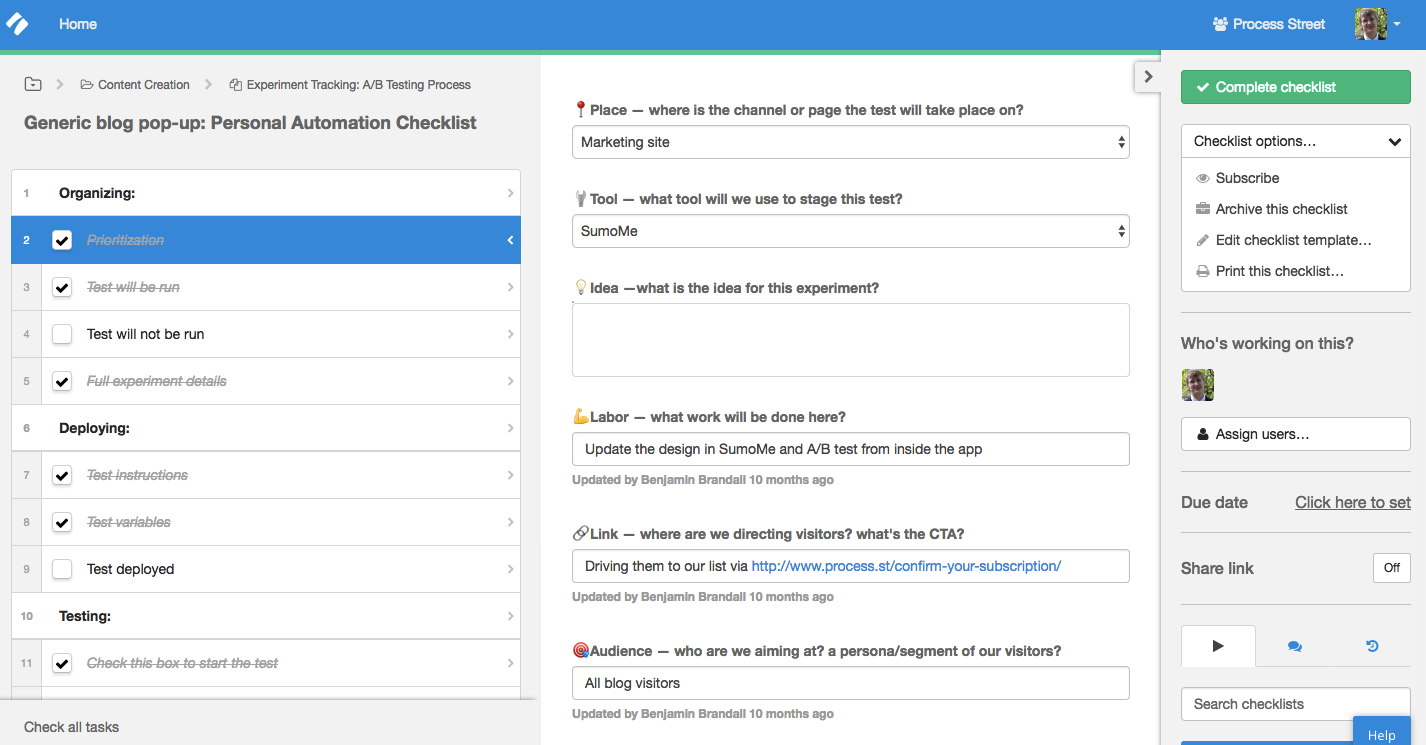 What’s the point, you may ask?

Marie-Claire Ross — a safety process creator who has examined countless processes from large companies — has a couple of interesting facts to share from her experience creating and optimizing dull SOPs:

Marketing communications, on the other hand, are much more likely to be optimized for readability.

Taking a leaf out of the marketing playbook (which says that emoji result in 25% higher engagement), you could try optimizing your business documents with emoji to turn dry text-walls into digestible, scannable, and memorable documents.

If It’s Hard to Read, It’s Hard to Do — a psychology paper by Hyunjin Song and Norbert Schwarz — states that “people misread the ease of processing instructions as indicative of the ease with which the described behavior can be executed”.

In short, if your SOP looks unappealing and hard to execute, it’s going to be less effective and followed less closely. Human error will go up, and efficiency will go down.

Using useful emoji in your processes can make an impact on your employees’ willingness to actually read the documents and follow standard procedure. Boring SOPs are to blame for these dark days of normalized deviance and corner-cutting, and we think emoji can be part of the cure. 💊

It all started when Vinay noticed how eye-catching emoji are in our automated Process Street app emails:

And so, in this post, I’m going to explain how you can use emoji to make processes clearer, visually appealing, shorter, and more readable.

Using emoji to show which department is responsible for the task

For inter-departmental processes (a blog post process that involves both the marketing team and the design team, for example), you could use emoji to indicate the part of the process that’s handed off to another department.

Here are a few suggestions:

Since emoji are as universal as plain text, you can use them anywhere. Check out this example in Process Street of a website launch process that uses emoji to indicate a hand-off between the design and development teams:

At a glance, process participants can get a better idea of which departments are responsible for which tasks. Plus, it looks a lot cooler.

Business Process Model & Notation is the most common standard for mapping business processes. I’ve already explained in a previous post how to use it to draw visualizations of processes, but you can also use some of the elements as emoji in your processes to quickly show the type of task the participants need to do.

Here are some suggestions, based on both common use-cases and BPMN activity types:

Here’s a few of the above emoji used in a Process Street template for sales cold-calling: 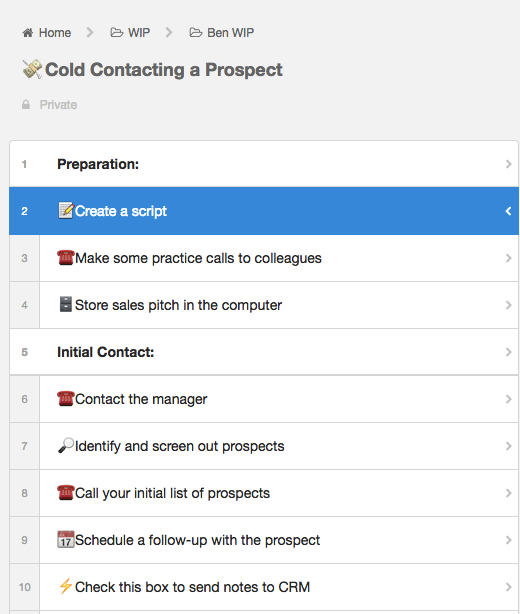 Participants can easily visualize their workflow steps this way, and it also makes it clear which checkboxes will trigger automations.

While the lists I’ve already shown you cover a big part of what happens inside processes, I also had some miscellaneous ideas that could be useful.

For example, what about using color-coded diamonds to represent logical branches?

Or, using the sunrise, sunset, and clock emojis to show what time of the day time-sensitive tasks should be completed:

In some cases, you might want to indicate task priority, too. While this is less likely in a step-by-step process, I thought it was an idea worth including:

The first forays into business document templates with emoji

The only real attempts I’ve seen to use emoji in business documents are from Kurt Braget, a startup founder and developer.

Here’s are the two document templates he created in Emojipoint (something he made up for the purposes of the content):

📍  Place – what channel the growth hack takes place in

💡 Idea – what the idea is for this growth hacking experiment

🔗  Link – this is how the hack is connected to your product, the hook, or link

🎯  Audience – who this is directed at

💸  Spend – how much money, time, resources you spent

💡 The name of the idea (a code name, in bold)
✏️ Description (should be short elevator pitch)
💩 Problem

How to use emoji on desktop

Emoji started out as a mobile-only option, but soon moved into the wider world of the web. That makes emoji less practical to use on desktop unless you use the Mac’s touch bar or get a dedicated physical emoji keyboard!

Here are the three main ways of inputting emoji on non-mobile devices:

Using the emoji keyboard on Mac

Apple has made it extremely easy for users to access emoji from desktop and insert them into any text area.

To get up a searchable list of emoji, use this key combination: ctrl + ⌘ + space

Using the emoji keyboard on Windows

There’s a few more steps to using emoji on Windows, but it’s entirely possible. First of all, open up the keyboard from the bottom task bar: 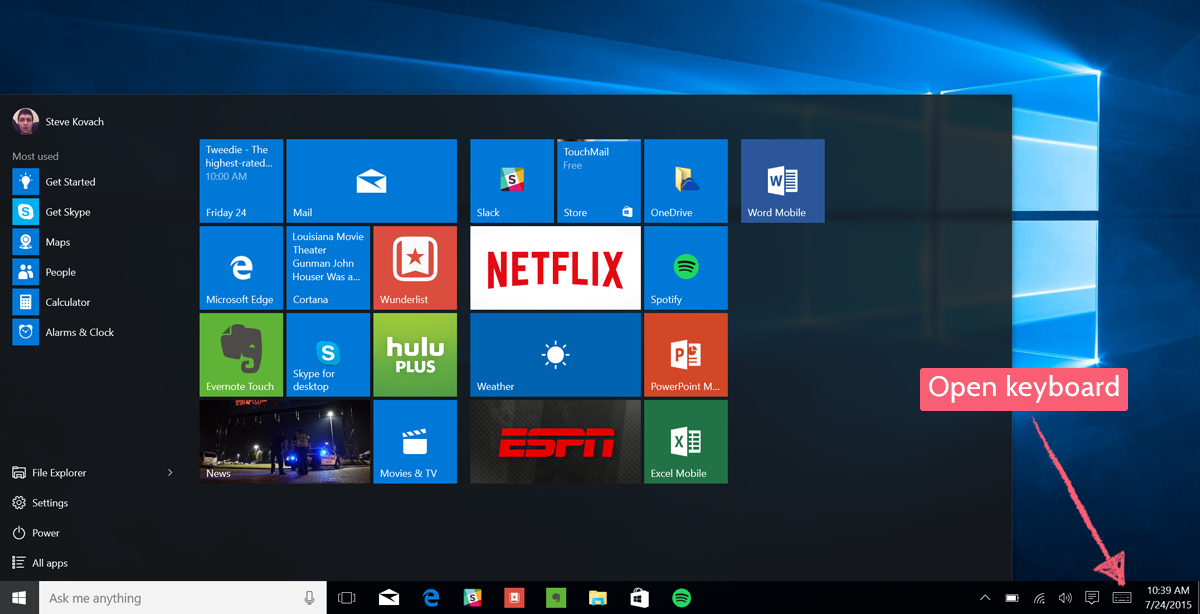 Once the keyboard pops up, click the smiley face icon to show all emoji: 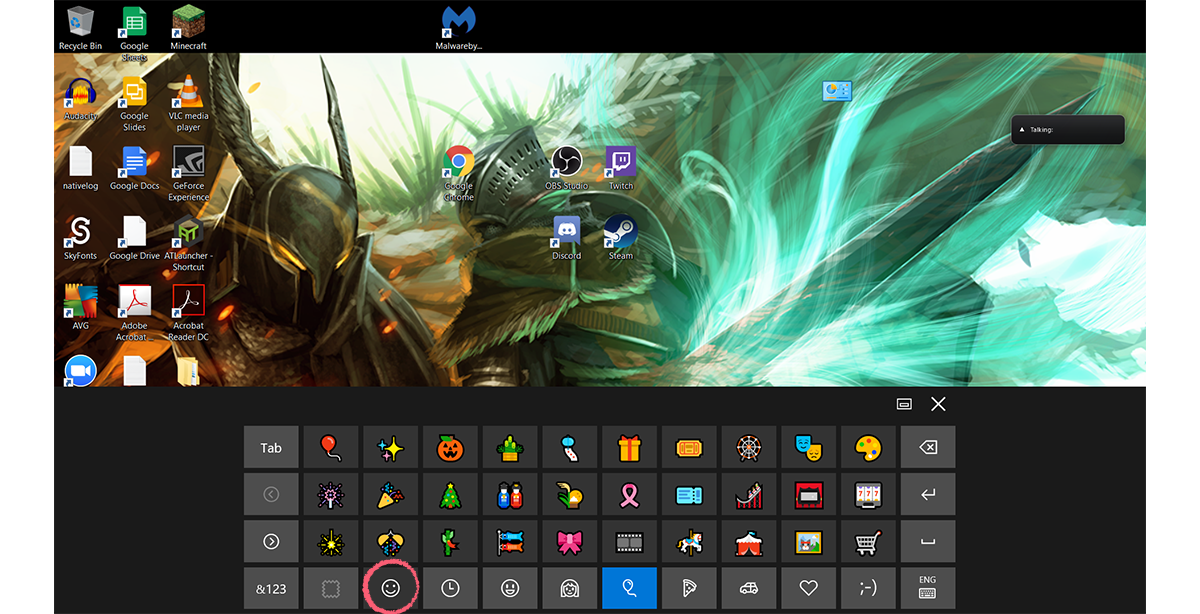 Using emoji on Linux or other systems

For other systems, you’ve got two options. The first is to use a Chrome extension like EmojiOne or Emoji Helper. The latter also works on Firefox, Opera, and Safari.

Alternatively, you can go to Emojipedia, search the emoji you want, and just copy-paste it.

Notes on how emoji display differently on different platforms

While the basic emoji specifications are fully agreed on by Unicode, the way they’re displayed on different platforms can differ quite significantly. One of the most common kinds — the ones you can see in Process Street screenshots above — are designed by Apple. The other major ones are Twitter’s emoji set (as seen in the text of this post), and Microsoft’s.

There are not too many major differences between platforms, especially for the emoji I recommended already in this post. It is worth taking a look at the full chart, however, if you’re unsure and think there could be a communications breakdown. Here’s a snippet of the chart:

Final words on the use of emoji in business documents

Unlike something like ISO 9000 or BPMN, there’s no formal applications for emoji (yet!). That means that it’s all up to interpretation. In this post, I’ve tried to show you everything I know and everything I’ve found about practical uses for emoji outside the realms of teenagers on their phones.

I hope it’s given you some ideas about how you can make your business documents unique, useful, and fun. 😸

Are emojis showing up in the right way, in every email system, e.g., Gmail, Outlook?

They definitely render correctly in Gmail (you can see a screenshot near the top of the article), and Outlook’s notorious emoji incompatibility does also seem to have been recently fixed. Although, they will show as the slightly different Windows emoji (https://www.msoutlook.info/pictures/emoji-outlook-2016.png), which could have some margin for error in rare cases.