How A-Team Lending Made Employee Onboarding Paperless with Process Street 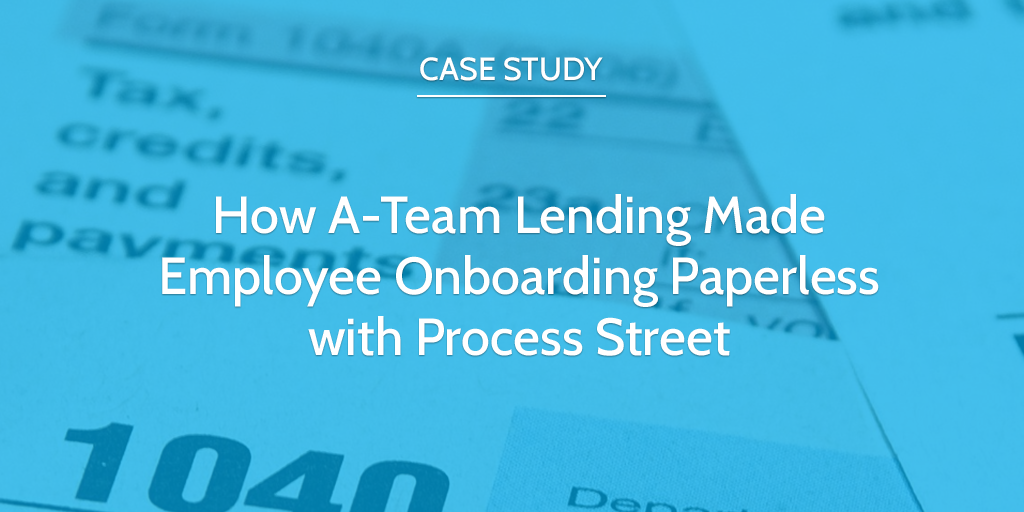 The A-Team Lending is a California-based mortgage broker with over a dozen full-time employees and 20 commissioned salespeople. The A-Team hired process consultant Cary Wan to handle their marketing and improve their business systems

Within the first month Cary has already managed to fully automate a large chunk of their HR systems which would otherwise require them to cover at least $30,000 extra in staffing costs to do manually.

A-Team Lending is rapidly scaling up and adding new salespeople to its team. This level of growth drove the firm to make big changes to the way they approach the onboarding process.

Why the A-Team needed Process Street

Instead of bogging the new hire down in a stack of forms to scan, sign and print, Cary uses Process Street as a trigger for form automation, allowing both him and his new hires to save hours per week on repetitive data entry.

A friction-free onboarding process is ideal for hiring loan salespeople — losses from the high rates of staff turnover can be reduced simply because new hire setup takes much less time than a traditional paper-based approach. This is essential in a highly-regulated industry like mortgage broking, where the initial paperwork is a series of frustrating hoops to jump through.

We got on a call with Cary to find out exactly how he managed to make such drastic improvements to the company’s onboarding process, and how Process Street helped them in their quest to become paperless.

“Most employers will send employees a link to the forms, and at best they can print it, fill it out, sign, scan it and send it back… With Process Street, we’ve made our employee onboarding completely paperless.” — Cary Wan

While most of our case studies focus on the general business improvements that come with processes, this post has a real system we’re going to dive into and dissect, bit by bit.

By the end of the post, you’ll be able to set up the exact same system to automate the collecting and signing of documents in your business.

As well as assigning training and getting the employee set up with their company accounts, onboarding is a lot about collecting the necessary forms to stay in compliance with the law. This means collecting dozens of pieces of information across multiple forms — name, address, social security number, ethnicity, signature, and more.

In total, Cary automates the creation and signature collection of the following forms:

Cary broke this problem down to the bare essentials. His firm’s onboarding forms are heavy-duty — the employee needs to provide over 50 unique pieces of information in total, and some of these fields like name and address are used repeatedly. Instead of simply sending over the forms to the employee, Cary uses Process Street to collect information just once and then route it to multiple forms:

The first two tasks — Team Member Info and Form W-4 consist of the most basic and universal form fields for the employee’s information. Since first name and last name, for example, are collected in the first task, any time Cary needs to push those into another form he can reference those fields instead of re-entering the information.

This works by pushing data to WebMerge via Zapier. WebMerge is a document creation platform that lets you upload form templates and populate them with information from other sources. Zapier lets you connect over 1,000 other apps, including both Process Street and WebMerge. By collectng employee information in a Process Street checklist, Cary can simply hit the checkbox and have the forms automatically created in WebMerge and then emailed off for a signature.

With this system, getting forms sent off for a signature is literally as simple as checking off the name of the form in the checklist.

Let’s take a look at how you can implement this, using the example of a W4 form.

Turning your forms into fillable PDFs

The first step is to download a PDF copy of the W4. The official form offered by the U.S. government comes with preset PDF form fields that you can map to Process Street fields in Zapier, but the variables are named ambiguously. To make setup easier, you might want to use a tool like Adobe Acrobat or another PDF editing tool to specify your own form field variable names. Acrobat is the dominant choice, but it’s possible to create a fillable PDF for free using PDF Editor 6. 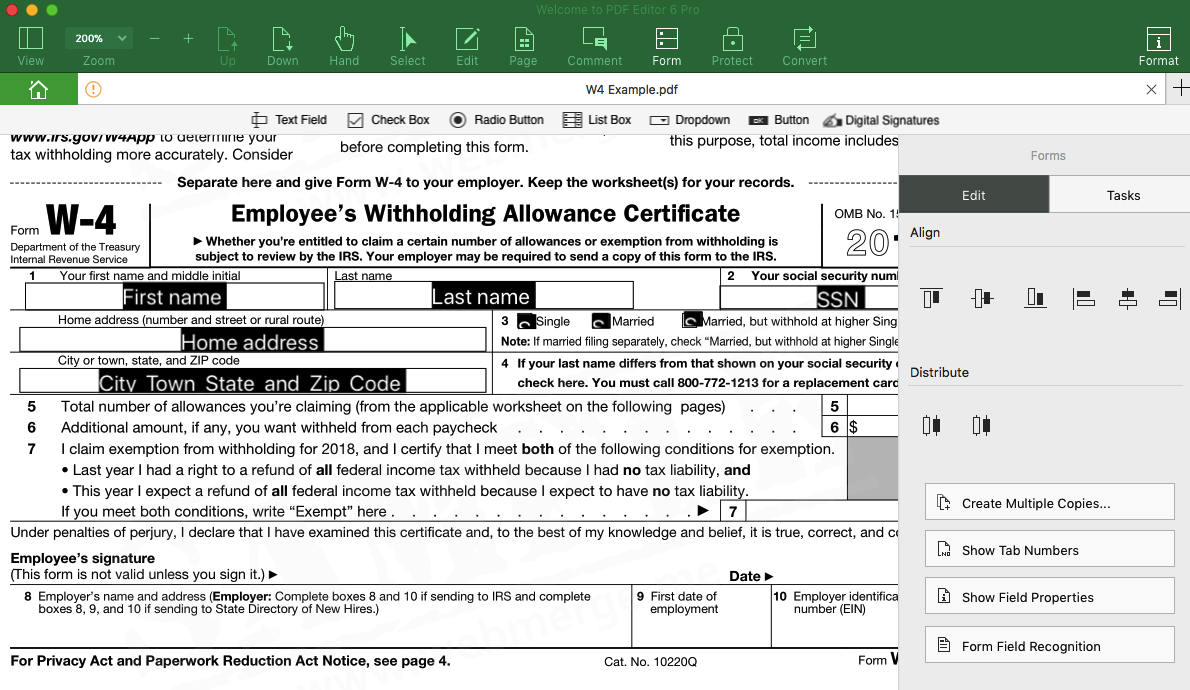 This initial set up is the most time-consuming part, but the ROI is well worth it. Cary says he took about one working day to digitize his forms and set up the automation, but the money saved is equivalent to one full-time employee.

Uploading the forms to WebMerge

With your fillable PDF finished, the next step is to upload it to WebMerge. Get a free WebMerge trial if you don’t already have it, and add a new document.

You’ll see the form fields you created in Acrobat or another PDF editor show up inside WebMerge and allow you push that information into the document from other apps. 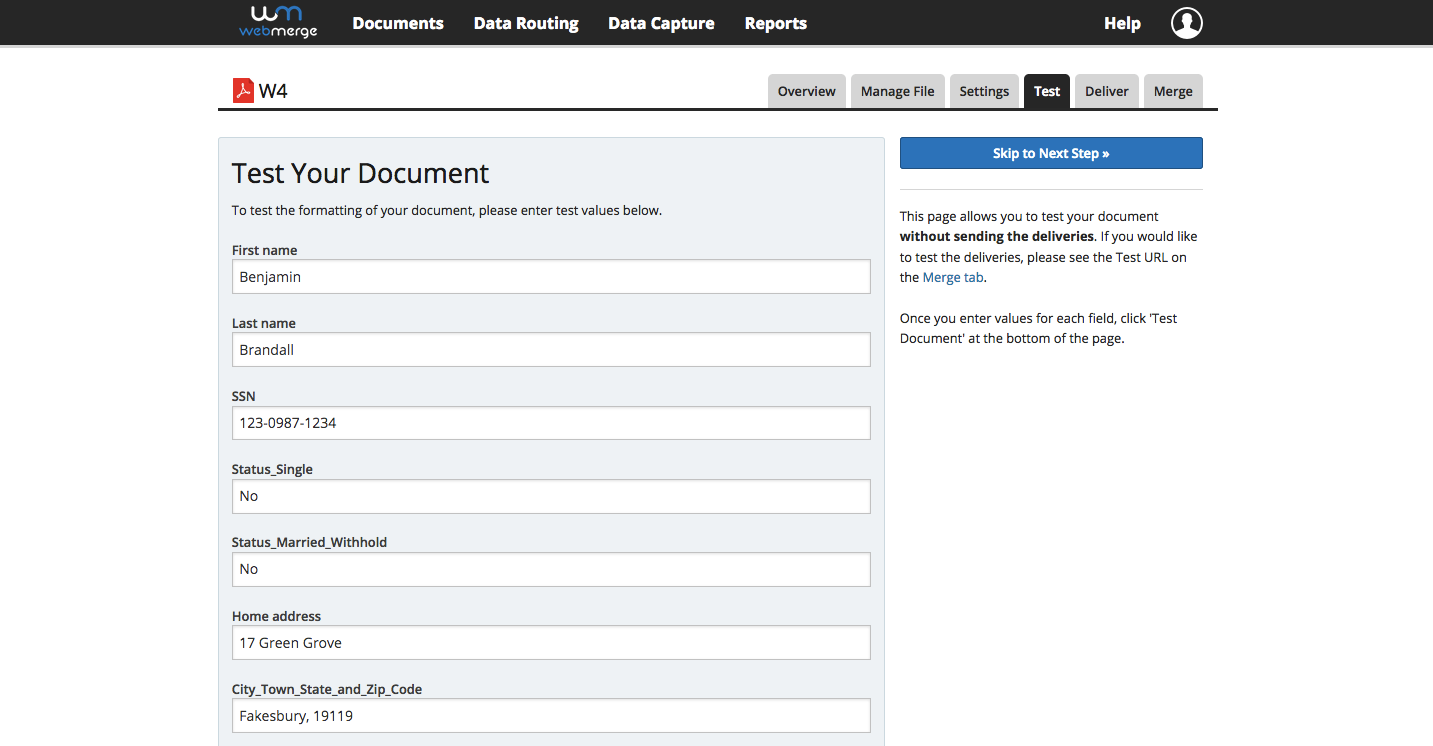 The Zapier configuration works by listening for new checked tasks in Process Street and then sending information to WebMerge via a webhook. The first part specifies the template and task in Process Street. For this example, we’ll use the W4 task. 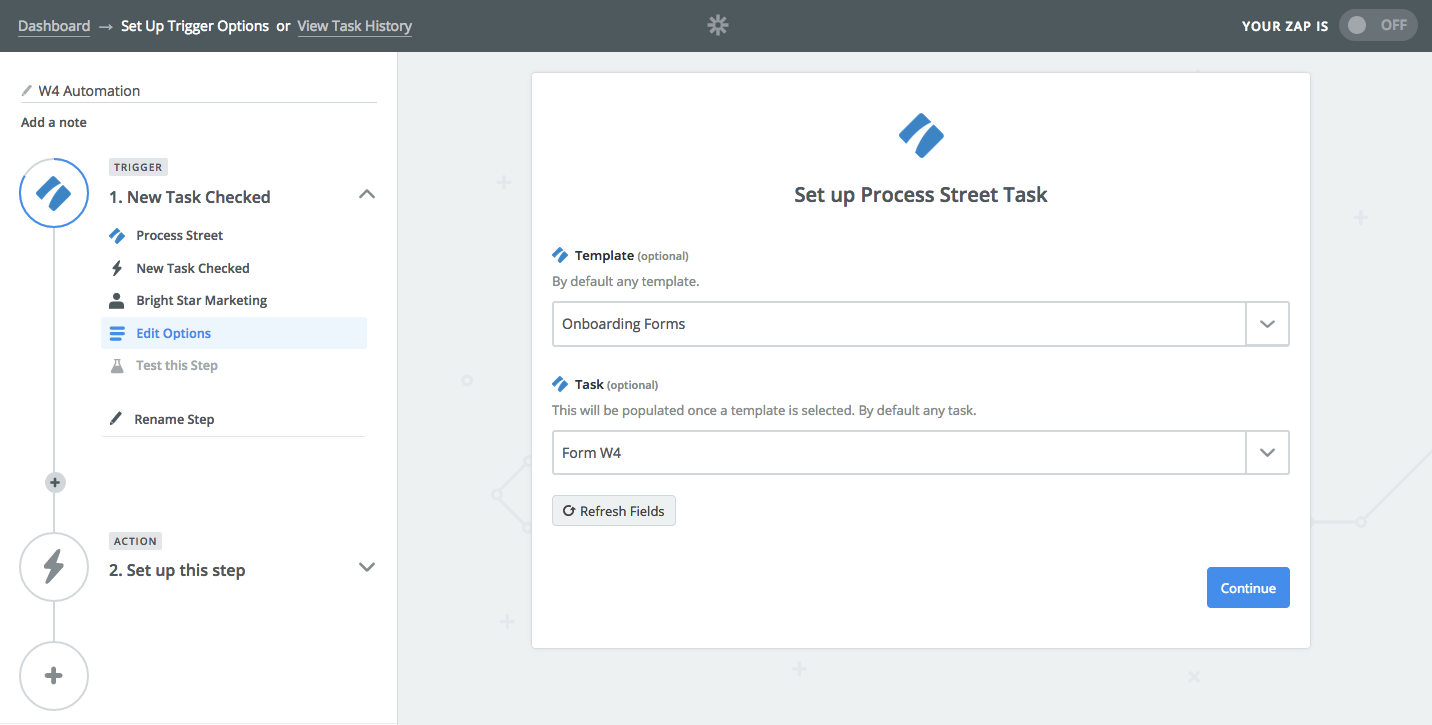 The next test step in Zapier requires you to have sample data inside Process Street, so be sure you’ve run a checklist from your forms onboarding template, filled in the data and checked off the W4 task.

The 2nd half of the zap — the action step — is all WebMerge. Select WebMerge’s “Create Document Merge” as the action. This is the option which lets you send data from other apps to WebMerge’s document fields. 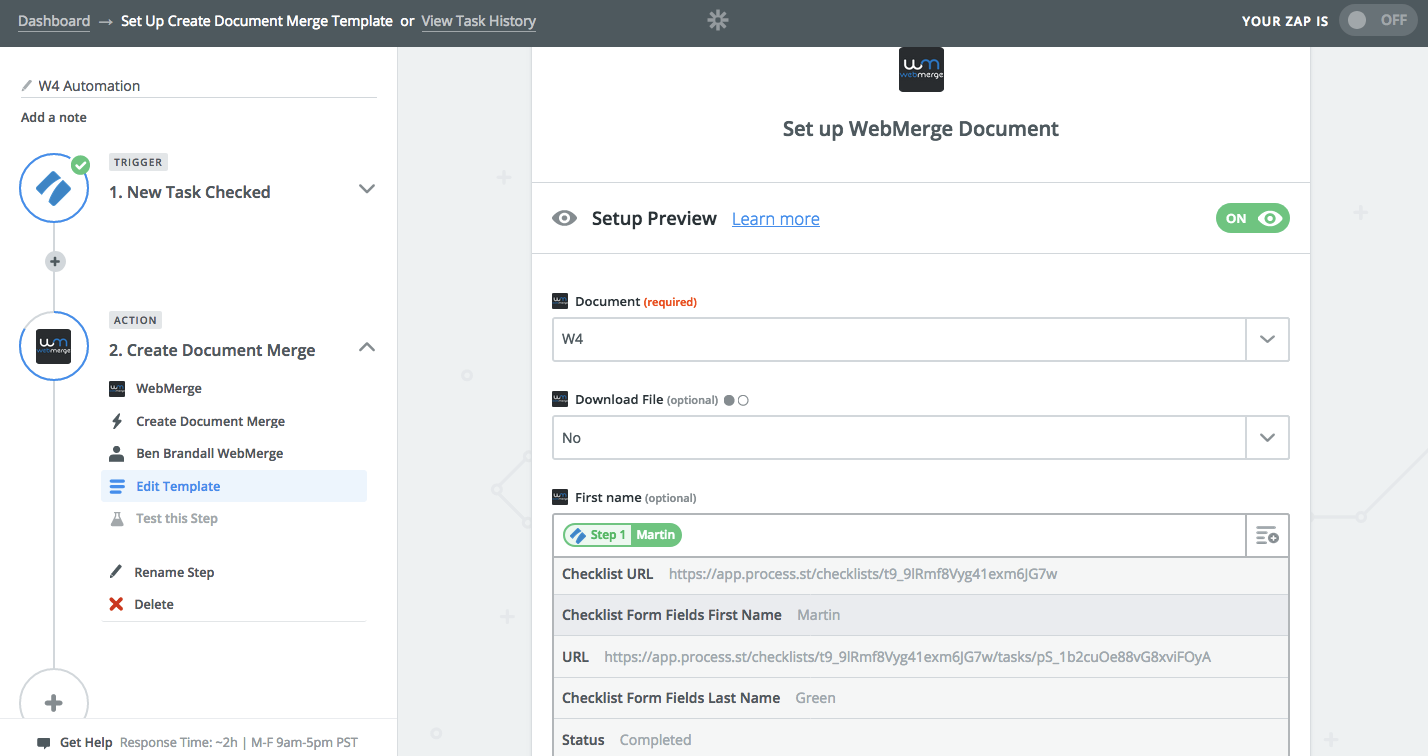 After checking each form field check box and filling in the required information, WebMerge creates the document.

But what happens after the document is created? Often, documents need signatures too. To cover that and ensure the signing process is as easy as possible, Cary linked WebMerge up to DocuSign.

This allows Cary to handle signature collection automatically — the document is emailed to the employee who can sign it with a click and send it straight back.

Cary plans on expanding the process even further with more integrations. One option is to use Twilio to trigger text messages to new employees after the forms have been completed, welcoming them aboard. The same thing is possible by linking Zapier up to your Gmail account and filling the Gmail template with form data.

A process that might otherwise take hours is handled automatically, with limited input from HR staff.

Most importantly for the rapidly-growing A-Team Lending, it happens quickly and gives less opportunity for the hiring process to fall through or get held up on a minor snag.

“Annoyances like printing, signing and emailing are obstacles that prevent people from taking action and drag the process to take longer than it should. If you can get your onboarding to be easy, fun, and fast — using Process Street’s beautiful UI and ease of DocuSigning from your phone/computer — then it’s more likely to be completed and you close the deal quickly.”

A-Team Lending needed a lean onboarding flow because of the high turnover of 100%-commission loan salespeople. Any time saved on setting up new employees will compound over time, making this automation more valuable the more it’s used.

“Traditionally, forms are very repetitive. Since the same data — employee name, social security number, address — needs to be used on several different forms, you can avoid repeating yourself by running all documents from the same checklist. This gets all our onboarding forms done in one go, making them easy to deliver and track.“

If you want to automate your onboarding forms and save time when you hire a new employee, sign up to Process Street to get started.