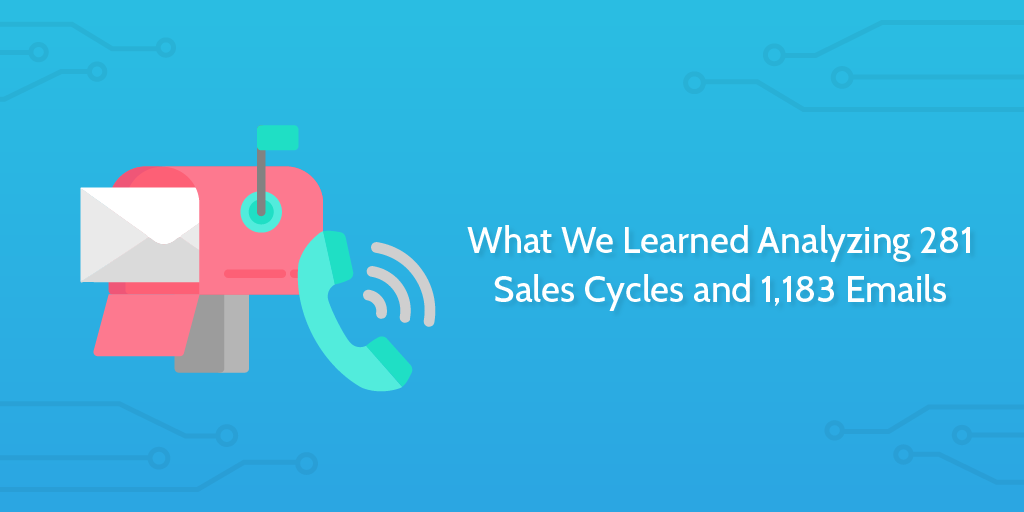 That’s because the most direct way to impact your revenues is by making sure your sales processes are as tight as possible.

But, how can you be sure you use the most effective methods to follow up with leads and close more deals?

Maybe we can help.

In partnership with PersistIQ, we analyzed the complete sales cadences of 281 SaaS companies, from intro to break-up. That included signing up for a whole heap of free trials, and then collecting over 1,000 emails and voicemail transcriptions.

If you want to get proven insights from some of the world’s best SaaS sales teams, build your ideal sales sequence and learn to write emails that close deals, then check out Inside SaaS Sales.

Inside SaaS Sales is a microsite we launched that collects and organizes every single piece of sales communication we received. It’s all there for you to browse through, swipe, and analyze.

With such a lot of data, it’d be silly not to study it to find out the key trends and share that knowledge with you. So, keep reading for our full analysis of the data!

Here are our key findings: 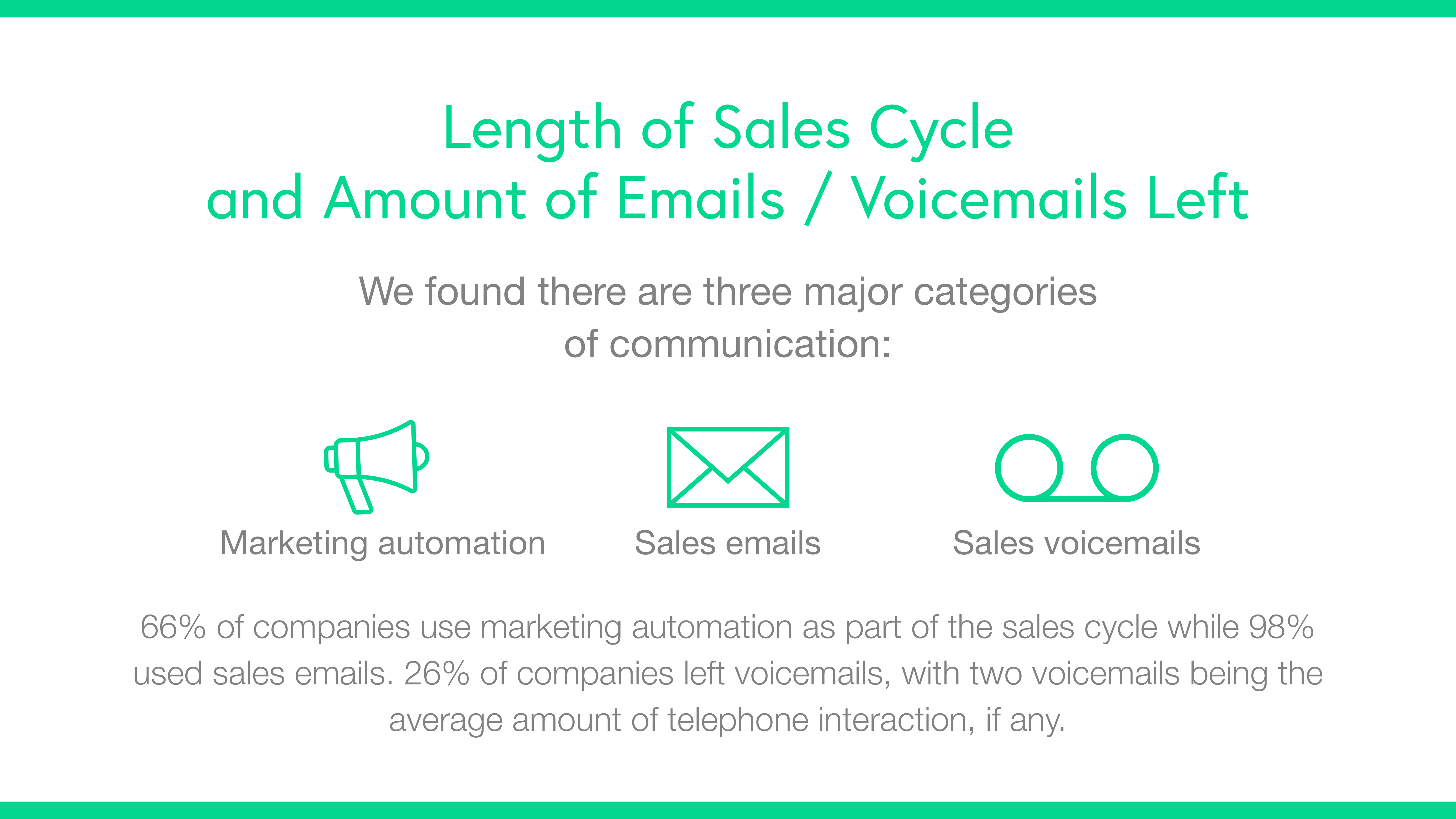 On average, sales teams will follow up with a lead for 9 days before giving up, and send one email every day. That’s around 2 business weeks of daily contact.

While 25% of companies sent only one email before giving up, some companies like Epicor were much more persistent:

Companies like Epicor who left regular voicemails have sales cadences 160% longer on average, presumably because they take a more ‘high-touch’ approach with less automation.

For 74% of companies, phone calls aren’t even part of the process, making it possible for these companies to fully automate the lead nurturing process and save time by not following up manually with leads that don’t respond.

37% of companies made only one touchpoint (email or voicemail) upon sign-up, while 40% made between 3 and 10. The most persistent companies made up only 23% of the set, sending anywhere between 11 and 36 emails and voicemails in a month.

Email and voicemails are sent in sequence

A common pattern we found was the trend of sending an email and then leaving a voicemail soon after asking if the lead has seen it.

Making reference to an email or some other communication gives the salesperson a better reason to call. HubSpot calls this ‘opening with context’ in their guide to writing sales emails. They recommend this as a winning strategy, and give the example of a salesperson making a call to a lead right after emailing with reference to the email they just sent. 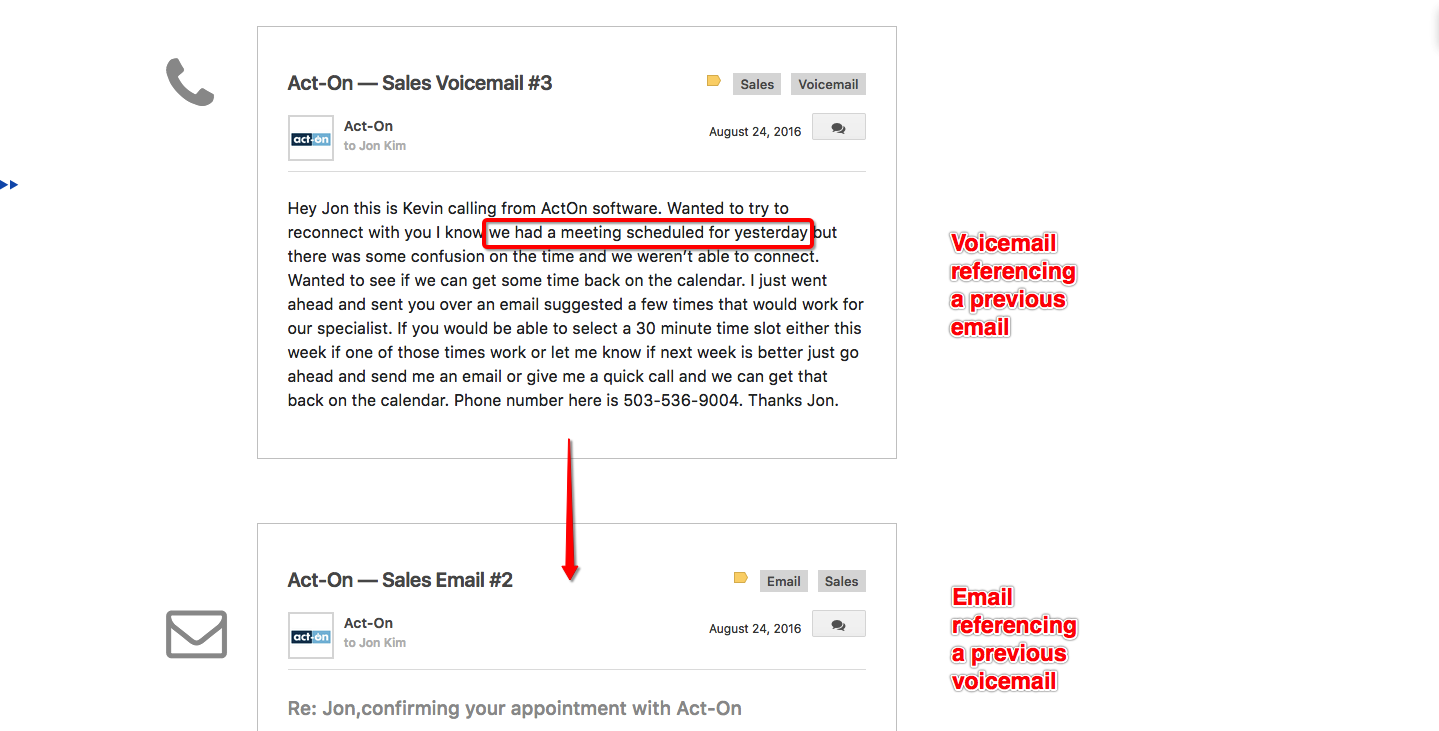 Communication with context automatically feels more genuine and friendly than pushy repetition with the same messaging.

53% of the sales cycle is automated 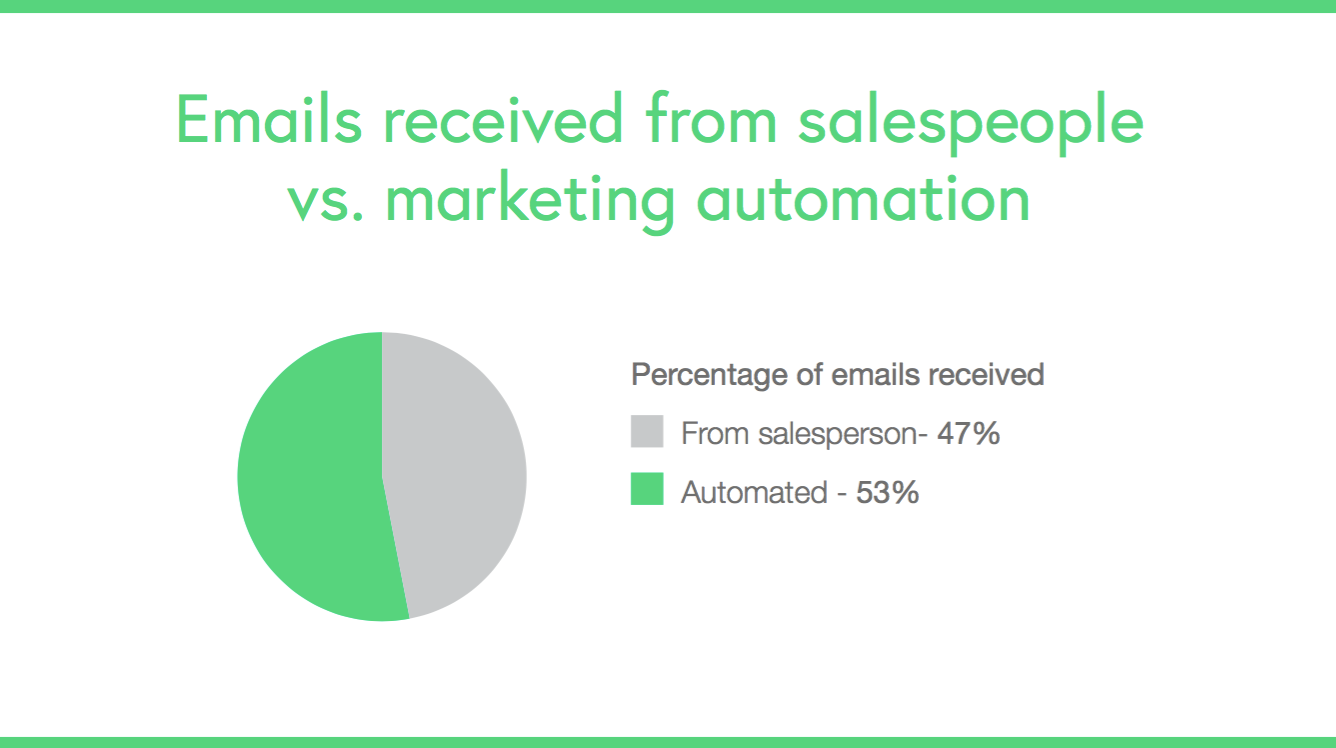 Manually sending emails allows you to add more personalization that could help to persuade, but can be very inefficient at scale. For that reason, 65% of companies hand leads off to an automated marketing campaign and 39% of companies send only automated emails.

Overall, just under half of the total communications were from a human, with 53% of emails being automated. This is because almost two thirds of companies subscribe you to their marketing drip campaigns when you sign up for a demo or a free trial. These campaigns can be used to invite the lead to webinars and send helpful resources as they progress through their trial.

For example, Slack’s fully automated sequence consists of just 5 emails, and each of them push the signup towards what Slack has detected to be the most common factors for retention: 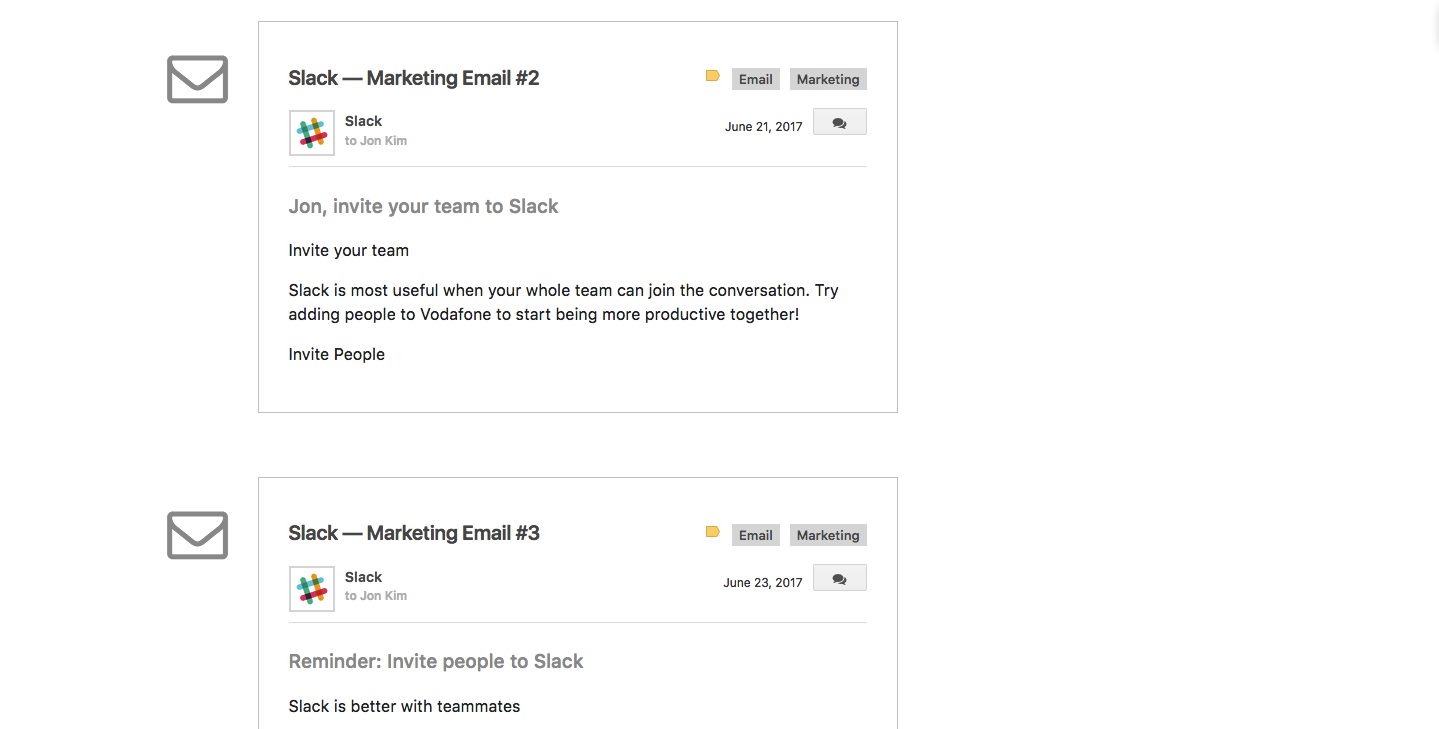 Alternatively, some companies like Salesforce combine automated user onboarding emails with attempts to reach the lead via manual email:

In this post, Groove breaks down their automated onboarding sequence, which is presumably something that runs alongside their manual sales communications.

Groove CEO Alex Turnbull explains, “Once someone signs up for a free trial, we send them an entirely new drip, with the goal of helping them get as much value from Groove as possible, and ultimately becoming a paying customer.”

This is Groove’s workflow for automated free trial signup emails: 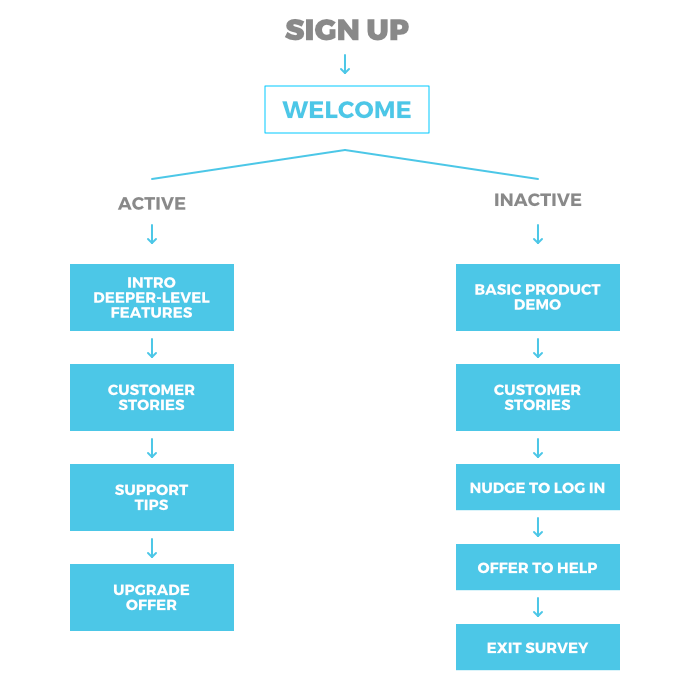 You can see this same pattern in the cadences of Intacct (here), BigCommerce (here), and AppDynamics (here). In our study, we found that the average length of an automated campaign is 3 emails.

54% of contacts are sales or business development staff

Collecting sales emails doesn’t just give you information on the content and frequency, it also provides insight into the number of people involved in the process of following up with one lead, and those people’s job title and role.

We found that on average, sales teams assign two contacts to a lead. Predictably, the majority of the first points of contact have ‘sales’ in their job titles. However, for smaller companies it’s not uncommon for the CEO to reach out (or at least sign off on part of an automated sales follow-up campaign). 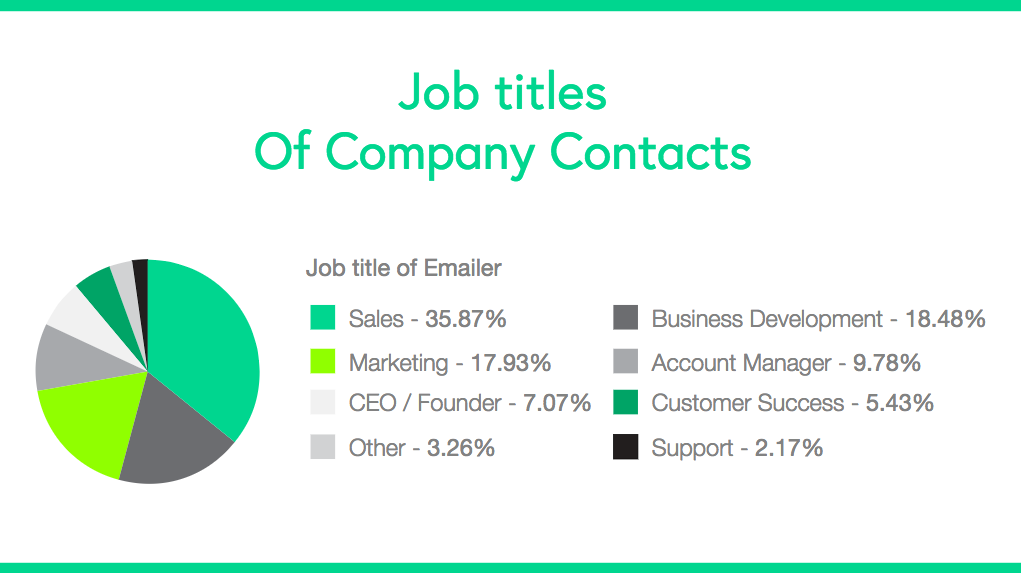 MailChimp is used by 49% of SaaS companies

Almost two thirds of companies in this study use some level of marketing automation in their sales processes, and the tools they used varied wildly. MailChimp is the go-to marketing automation tool for 48% of the companies, but the prevalence of HubSpot and Salesforce’s Marketing Cloud gives us an extra insight into which CRMs SaaS companies are likely using, also. 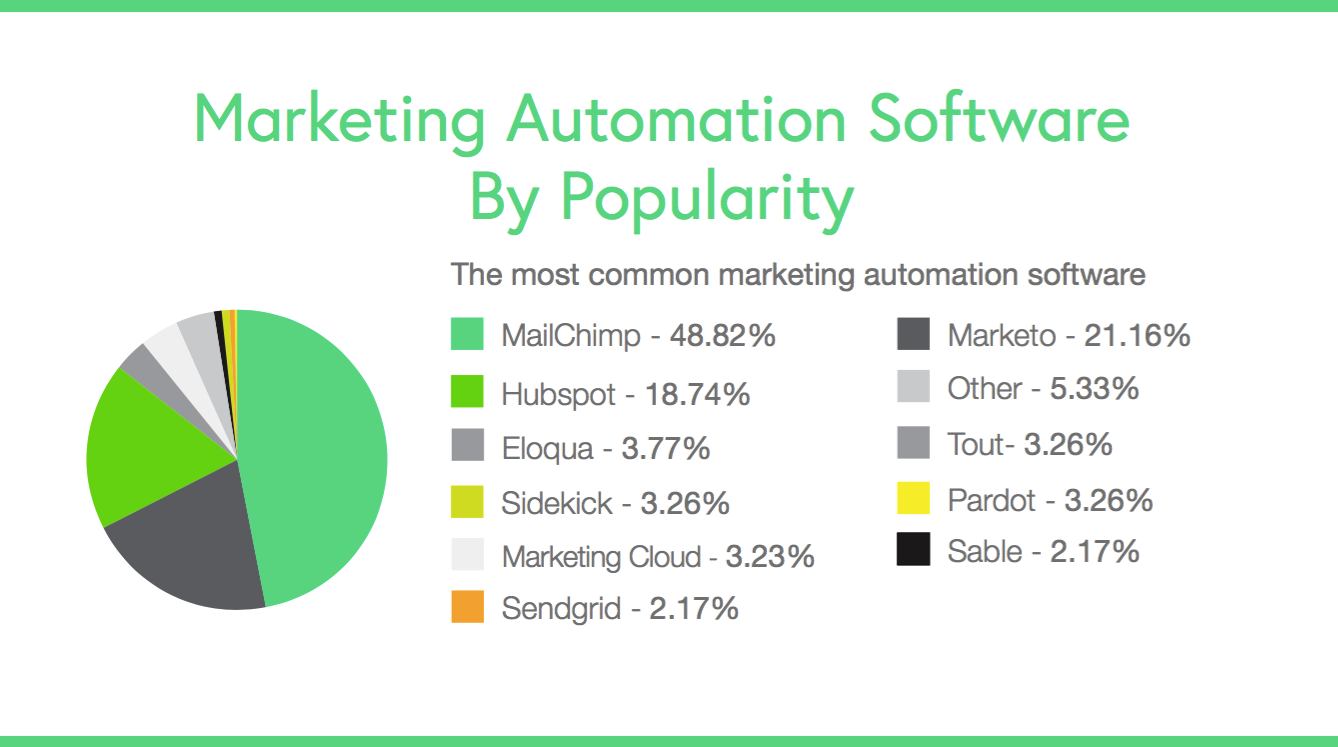 Sales communication is short, direct, and in context

Including signatures, the average word count of a sales email is 129 words. Since all leads are presumably busy, sales communication is best kept brief, direct, and with context. Here’s an example from Bamboo HR: 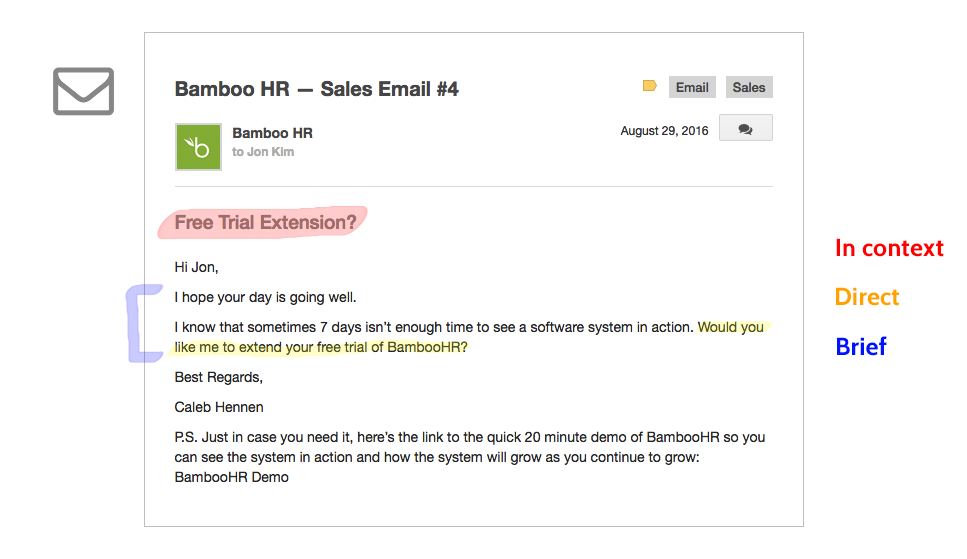 The email also doesn’t assume the lead has been following the content so far, and drops another link to their demo call to action in the P.S.

Words and phrases used in sales emails and voicemails

The 5 most common words in sales email subject lines also prove how sales communication is most often done directly and with context:

The 5 most common phrases in sales email subject lines:

The most common phrases in voicemails:

A ‘re:’ is often used to make the recipient believe they’re receiving something they’ve already replied to. Since, in this study, we didn’t send any replies, all ‘re:’s are false.

Litmus describes this technique as one that improves open rates while frustrating readers:

“Making an email appear like it was being forwarded or part of an ongoing conversation thread hides the commercial nature of the message and makes an email look like it was coming from a trusted source—a colleague or a friend, for example. Making subscribers believe a message is coming from someone you have already emailed will likely lead to higher open rates—driven by people like me, who think there’s an important message from a colleague in their inbox. I was frustrated with this trick, hit unsubscribe, and forever banned this brand from my inbox.”

As Crowdcast CEO Cy Hossain said in his blog post on Referral SaaSquatch, “If you’ve got a big-ticket item to sell, webinars are the way to go.”

And it’s true. The SaaS companies in this study serve big and small companies alike, but the enterprise B2B tools are the ones that use mostly webinars. This includes Datanyze (costs several thousand dollars per year at least), Apprenda (doesn’t show pricing on the site), and Cloudability (enterprise-targeted).

Webinars are both a way to educate leads on why they need your product, and a way to show them how to use it. Reportedly, webinars also get a good engagement rate: marketer Jeff Molander writes that 94% of his webinar attendants stay until the end, and his most successful webinar had a close rate of 29%.

A study by ReadyTalk found that 50% of registrants end up attending webinars, and that the average webinar had around 260 registrants. The engaging format and high conversion rates make webinars the 2nd best content for ROI.

Using the details of a fictional Vodafone employee, we signed up to SaaS companies from the Montclare SaaS 250, and the top startups on AngelList. While no follow-up effort from our side was made, we tracked and archived all voicemail and email activity to build a set of over 2,000 data points.

To collect the emails, we connected Gmail up to Google Sheets via Zapier, and fed each part of the email (from address, subject line, body text, etc.) into its own column. The voicemails were captured and transcribed by Grasshopper, which emailed computer-generated transcriptions to the same address.

We tided and formatted the data in Google Sheets, TextWrangler (for lots of grep searches!), and Airtable.

Since the analyzed SaaS companies are among the world’s most successful, the way they nurture leads and run their sales cycles could be considered best practice. Here are the best practices you can extract from this study:

To browse the full sales cycles of 281 SaaS companies and learn from the top salespeople, visit Inside SaaS Sales, our huge archive of sales communication.