Nudge Theory: How to Influence Decisions Without Ads 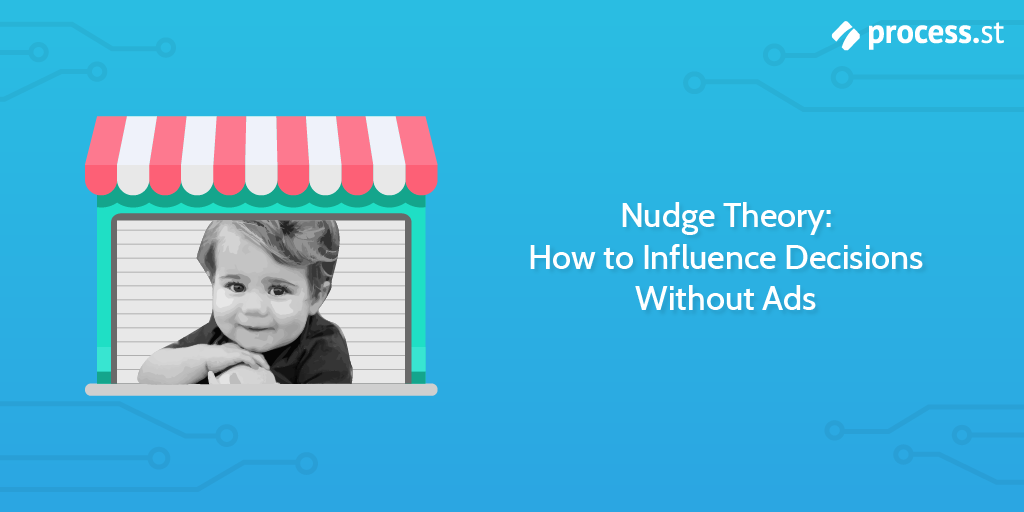 We’ve all felt overwhelmed by advertisements and burned out by peer pressure. Most of us also want to influence people’s decisions to try and get a certain outcome.

That’s where nudge theory comes in.

Less intrusive than advertising and so widely applicable that it’s seen implementation in everything from architecture to politics and charity drives, nudge theory is a great way to present choices to your audience in a way that subtly promotes the one you want them to make.

So, stick around to learn what nudge theory is all about and see how you can use it to influence decisions without making your audience feel like they’re being forced into it.

What is nudge theory? 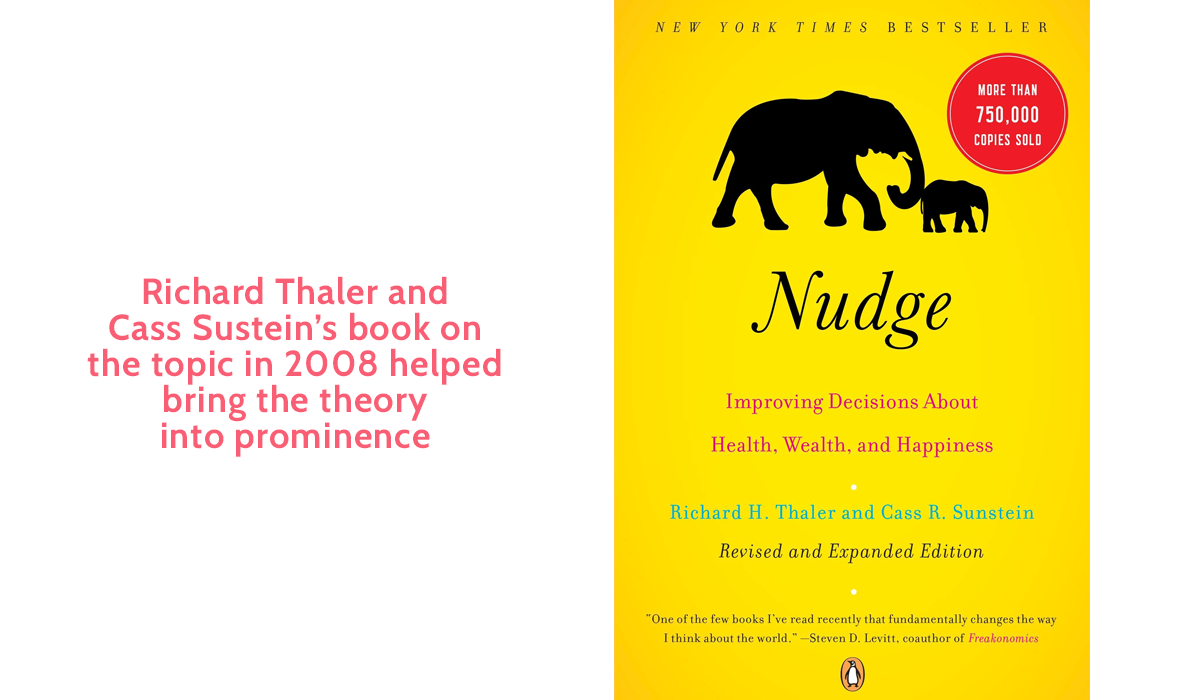 While the beginnings of nudge theory have been around since before 1995, it was only made prominent through Richard Thaler and Cass Sunstein‘s book on the topic in 2008.

A “nudge” is anything which serves to predictably cause people to behave in a certain way without removing their choice in the matter. You can’t “nudge” someone if they have no option but to act in the way you want them to.

It’s also known as “choice architecture”, as the theory is all about designing the available choices to encourage a specific outcome.

From politics to architecture and healthcare, nudges can be used to encourage actions of almost every kind. More specifically for our purposes, it’s a powerful tool for businesses looking to improve their sales and keep their employees happy. Better still, you don’t have to pick up yet another business app – it’s all about the application of a theory.

Before that though, let’s take a look at a wider application of nudge; that of architecture and retail.

Nudge theory in architecture and retail

Architects have been using nudge theory to influence people in subtle ways, such as a floor plan which encourages the use of certain facilities above others.

An easy way to explain it is to think about your local store and the way that they arrange produce. It’s not architecture per se but uses nudge theory in an identical way in the eyes of those who walk around the building.

Stores don’t arrange their stock willy-nilly; there’s an art to laying things out in order to draw attention to certain products over others and encourage specific browsing patterns.

For example, you could put items which don’t sell as often closer to the door so that people have to walk past them in order to get to their regular purchases.

Alternatively, putting popular items at the entrance to the store may attract shoppers who are browsing and wouldn’t otherwise make a sale. It’s a trade-off, and depends on your business and customers.

Take supermarkets for instance. Often they will have small consumable items closer to checkouts to nudge shoppers towards last-minute impulse buying.

You didn’t walk in there to buy a KitKat but seeing a bunch of them sitting within arm’s reach as you wait in the queue is a great way to create temptation.

“Nudging people towards certain actions”, I hear you say, “That sounds just like advertising!”

Nudges are usually thought of as much less intrusive and passive than advertisements are.

Ads typically try to catch your attention and inspire you to make a purchase – a decision you might not have considered otherwise. Nudges are all about presenting choices in a different way, with a clear out.

Most ads are too forceful to be considered a nudge. However, there are some that qualify – ecommerce and streaming services are great examples.

Let’s see how Amazon and Netflix do it.

I’ve been expanding my hobbies recently, and decided to apply my woodworking skills to a new craft – ring making. After reading up on the tools and materials I switched to Amazon to see what I could find. 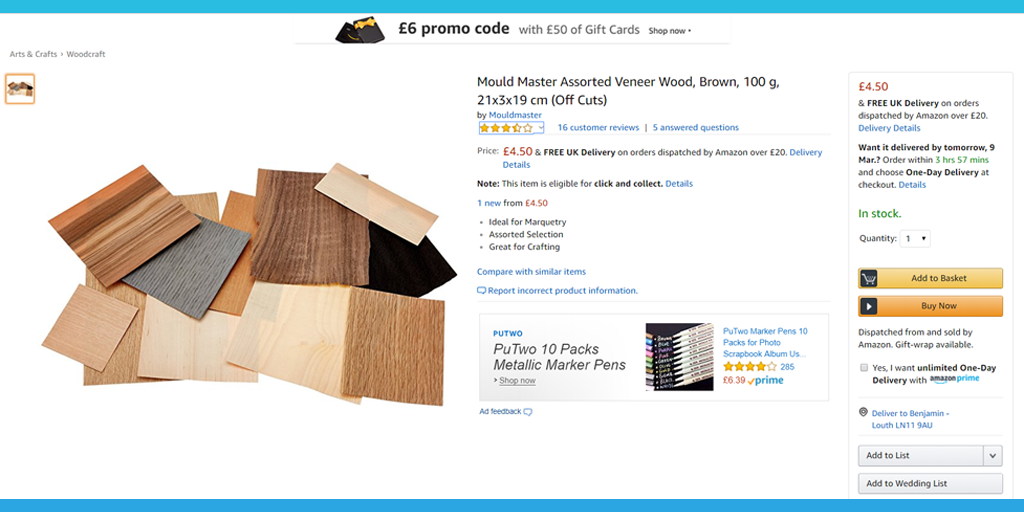 Bingo. A great selection of veneer to use in the middle of the ring and make something more interesting than a wooden band. However, scrolling down you can see Amazon’s nudge advertising in action. 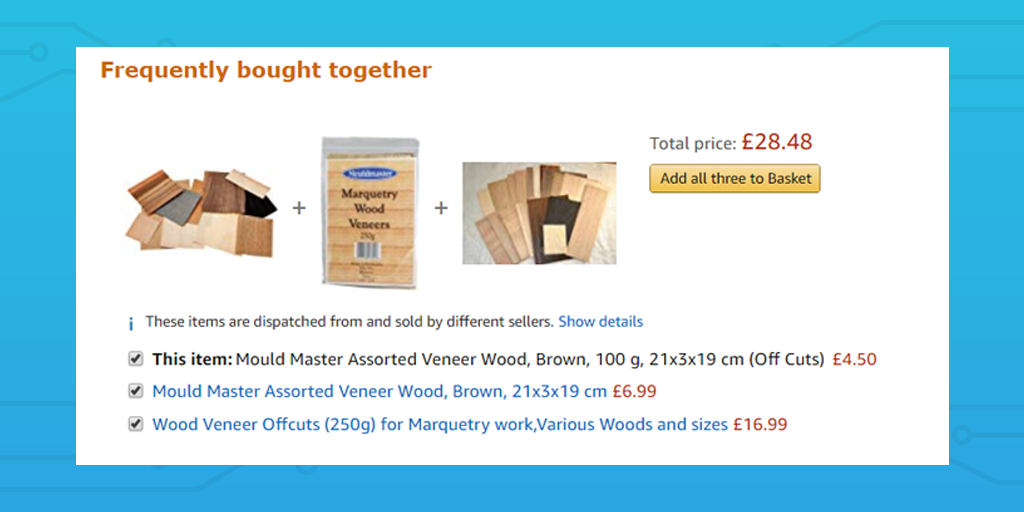 Amazon isn’t trying to sell you something you don’t already want here. Instead, it’s nudging you towards related purchases which interest most people who view that same item.

Even better – they’ve made it easy to add all three to the basket at once!

Netflix achieves the same thing through their recommendation list. Every show’s listing comes with a “More like this” tab displaying options similar to the one you’re (presumably) interested in watching. 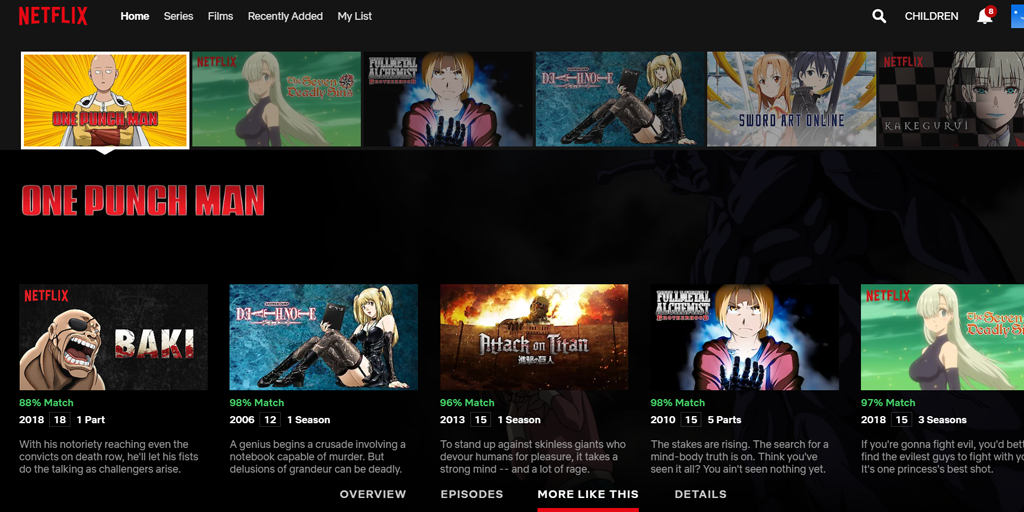 Ogilvy & Mather are titans of advertising, with countless essential marketing tips to share – I’m not here to try and argue otherwise. In 2012 they paid for an experimental solution to anti-social behavior in south-east London named Babies of the Borough.

Looking to prevent the 2011 riots and looting from re-occurring, the firm worked with graffiti artists to paint images of local babies on the shutters of local shops. The idea was to use these images to nudge people away from violent actions.

While other measures were also in place, the program helped lead to an 18% reduction in anti-social behavior in 2012.

Nudge theory is immensely useful in design, whether that be in product design, website design or even UX fields.

Think about it – it’s a theory dedicated to presenting an audience with choice in a way that encourages them to take an action without being too intrusive.

For example, let’s say that you’re designing something physical which serves a very specific purpose. Something which, accidentally, is often misused, leading to some unpleasant outcomes.

The theory is simple. You don’t want your “users” to miss and make a mess. It’s not nice, and it can often happen in locations where the clientele has access to alcohol.

The nudge in this case would be having a target to aim for, and that’s exactly what some brands have taken to doing. 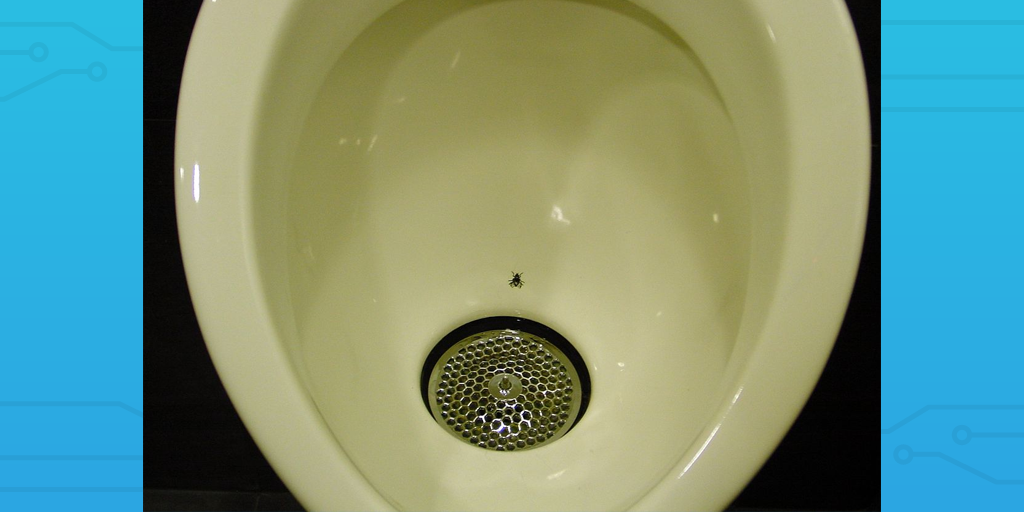 It’s not pleasant but by putting a small fly in the middle of white porcelain you draw the eye and help to make sure that things stay on target.

Let’s switch to some more sanitary nudges in design.

David Somerville (Strategy Director at Fresh Egg) made a fantastic presentation which sums up the uses of nudge in design and UX, which was used as part of a talk he gave in 2017.

This time the nudges are all about understanding your customer’s behavior and using that to help present your case to them.

Remember that nudges are only deemed as such if the audience has an easy out. You can’t try to lock them in and force their hand – it has to be their decision to take action, and so the action needs to be as attractive as possible.

To do this you need to figure out your customer personas and understand their wants and fears. This will then allow you to think of how to solve those while presenting the various options that you can offer.

For example, allaying fears through social proof on landing pages is a great way to remove some of the biggest obstacles (a fear of the unknown and a lack of brand recognition) to getting someone to sign up.

Nudge theory in change management is all about helping your team to adapt to new changes by introducing them in small increments and letting your team see the value of them before they make the transition.

This does, however, mean that the changes you want to make need to be presented as a choice. You can’t apply nudge theory without giving the parties involved a choice as to whether to make the change, and so there’s an element of uncertainty as to whether things will go the way you want them to.

You can’t force the change on your team but it’s also likely to be something that you need to happen. The solution? Present the change in a way that makes your team wants it to happen. 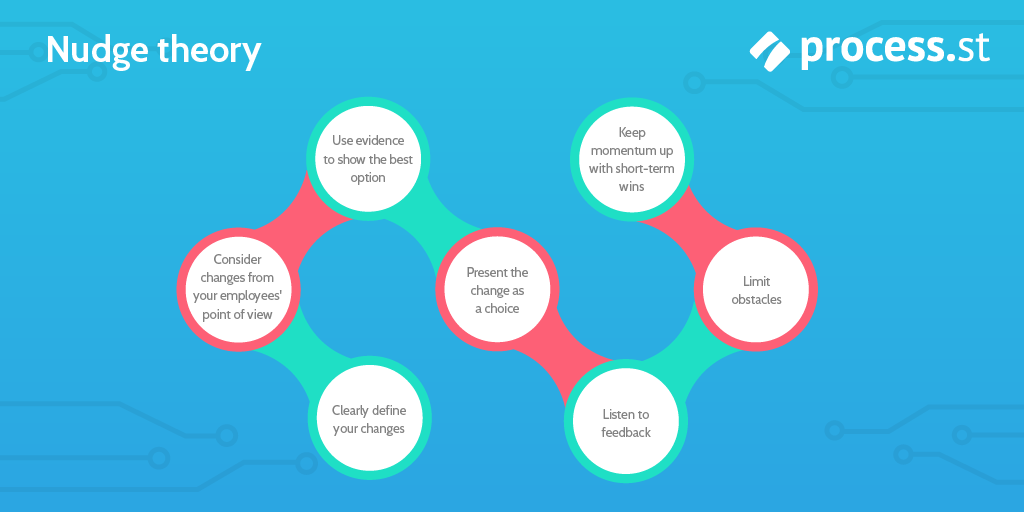 This is done by following these steps:

It’s a simple concept but can be incredibly effective in helping to get your team to accept the changes that you need them to make.

By including the whole team in your changes this way you’re also giving them a hand in shaping how they work. This makes them accountable for the changes they make, meaning they’re more likely to enforce them during the adoption period.

Talking to everyone who will be affected by the change is a great way to get some perspective on the issue and make sure that you haven’t forgotten anything when creating the plan in the first place. After all, no-one knows a process better than the people who perform it.

This is something which has happened in our team at Process Street recently.

We’ve been overhauling many of our processes – kicking off the year with some business process management to make sure that everything’s up to date. As a result, our teams had to make quite a few changes in the way we do things to account for various shortcuts that have appeared over time and new tools that have been released.

If we’d just made these changes to our process templates and said “get on with it”, we’d likely have a month or more of lower productivity while team members fight the new processes. That’s how habits work, after all.

Instead, we helped nudge the whole team towards our new processes and be more productive by making sure that everyone relevant to the processes was involved in shaping them. Every process was edited by the people directly responsible for keeping them going and managing the team who uses them, and any which spanned several departments were worked on over a recorded call which has been stored in documents which the whole team can access.

After that, we each hosted calls with our team members to make sure that everyone understood what the new processes and checklists entailed and why it was important to do things that way instead of letting things stay the same. Everyone was (and still is) allowed to voice their opinions, ask questions, and give feedback until everyone was happy with the new process.

When all is said and done, test, test, and test again

Nudge theory at first seems a little vague, as there’s no set model for applying it to a given discipline. However, with a little creativity and consideration for the people you’re trying to influence, it can become a powerhouse for influencing decisions in a non-intrusive way.

Customers don’t run the risk of feeling bombarded as nudges are far less imposing than advertising, yet the effects can be very similar in terms of altering behavior. The trick is to understand who you’re trying to affect and how to pose choices in a way that makes the desired outcome the most appealing.

Above all else, the most important thing to do with any application of nudge theory is to test the outcomes and iterate based on what you find. There’s always improvements to be made and new ways to apply nudge theory.

Do you know any interesting examples of nudge theory in use? Let me know in the comments below!