PDCA: How to Eliminate Error in Your Processes and Products 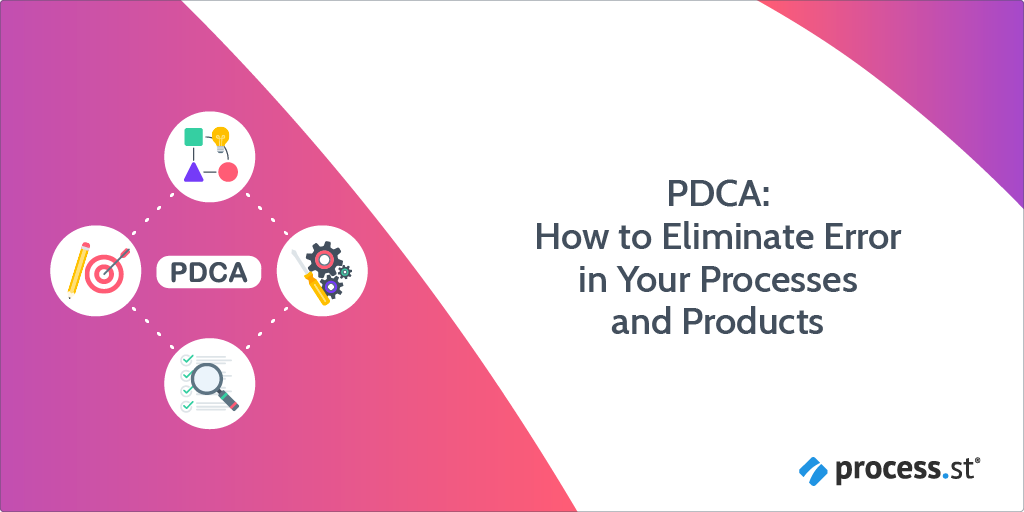 Product defects can range from benign to deadly. The Ford Pinto, for example, caused up to 180 deaths and many more disfigurements before being recalled due to fuel tank safety defects.

Ford’s resulting loss of reputation (especially because they had known about the issue and failed to take action) and money in lawsuits is something nobody wants to deal with. Errors and defects thus should be identified and dealt with as soon as possible.

That’s why this article from us here at Process Street will take a look at PDCA – the continuous improvement cycle dedicated to doing just that.

PDCA (Plan-Do-Check-Act) is a four-step cycle for continuous improvement. The way it does this is through identifying errors, creating hypotheses to deal with them, testing the method, and acting on the results.

Some refer to it as the Deming Cycle, however, this ignores the fact that PDCA is an offshoot of Deming’s theory, and does not fulfill the same role.

The key distinction to make here is that of PDCA vs PDSA.

While I’ll get into a little more detail later, PDSA is the true Deming Cycle while PDCA was an adaptation of Deming’s original theory by the Japanese.

The changes seem minor at first – how much difference can changing the “Check” step to “Study” really make?

Again, without getting bogged down this early, it can be best summarised as a difference in focus, application, and method. PDCA focuses on creating plans to tackle errors within a process or product, testing a hypothesis, and altering or implementing the plan based on the results of small-scale tests.

This is the core of PDCA. It’s not focused on a high-level overview of the situation or at a management-level. Instead, you’re taking a single process or product and testing methods to reduce measurable errors within it.

What is PDCA?: Plan

Every PDCA starts with the Plan stage.

First, you need to know the scope of your project. This means deciding which product or process you’re going to be eliminating errors from.

Next, you need to sit down and decide what problem you’re going to tackle. Remember, PDCA is concerned with reducing errors, which leaves you with two methods for selecting an issue.

While the obvious choice is to go for your larger problems first, there’s something to be said for choosing to clean up smaller issues instead. for one thing, these items may well end up playing into your larger problems, thus making the looming item easier to solve.

Take our team here at Process Street for example.

When the marketing team was much smaller (we had only two people in it!) we were facing two main problems. We weren’t producing enough content to fill out our ideal blog calendar, and I was still new, and so needed thorough training.

The immediate option for expansion was tempting – more writers would mean we could produce enough content to fill our calendar, get more product coverage, build a library of content faster, and so on.

However, the (relatively) smaller issue of my training was instead given practically sole focus, with us not hiring another team member for at least 6 months. This, in the long run, was a much better choice, as more new writers would have made our limited resources strain even further, and gave me time to improve my craft to the point where I (and the team as a result) was getting recognized for my writing.

So, you’ve selected your focus and the problem you want to tackle. Great. Now you need to create several hypotheses for solving the problem and choose which one you’re going to test for the rest of the cycle.

This will entirely depend on the problem you’re looking at, what it relates to, the resources you have on hand, and so on. In a perfect world, you’d be able to pay for an instant solution, but that’s (almost) never the only (or best) way to do it practically.

Let’s say that you run a business that makes toys.

You want to make it more profitable to sell a popular product – a wooden rocking horse. So, you look for problems in the production line, and notice that it takes twenty working hours to produce a single unit.

You meet with the head of manufacturing (or your carpenters if you’re a smaller team) and logistics to discuss potential solutions and come up with this list:

Of these options, the easiest to test is the price of delivery companies, so you decide to test this first.

What is PDCA?: Do

You’ll be glad to hear that things get easier (or, at least, easier to explain) from here on out!

Next is the Do phase which, as you might have guessed, involves putting your plan into action and measuring the results.

The key here is to work with the teams involved with the process or product you’re changing. This way you can make sure that they understand why the changes are necessary, what the thought process behind the new method is, and check that everyone takes the appropriate action.

In other words, you need a solid change management strategy.

The only thing to be wary of here is that your results aren’t compromised by other elements.

If you change your product delivery method, you should take into account other circumstances (eg, current global situations) and adjust your expectations accordingly.

It’s also worth testing your changes on a small-scale first. This way you can limit the number of elements that could affect your outcome, more accurately predict the effects, and limit any potential damage as a result.

What is PDCA?: Check

The Check phase of PDCA is where you analyze the results of your changes to see if the level of error was reduced.

The amount that your error levels were affected will depend on the problem you chose to tackle, the changes you made, the scale of your test, and so on. However, the difference itself is (ultimately) not the point of your analysis.

The important thing is to make an ultimate decision of whether your hypothesis was proven correct, and whether it should be deployed on a larger scale.

If errors were more scarce, the test was a success.

What is PDCA?: Act

Finally, we come to Act. This is exactly what you’d expect, with a few stipulations.

Generally speaking, if your hypothesis was proven successful, here is where you implement it in full. If it failed, it’s time to go back to the Plan phase and alter your hypothesis for later testing.

The tricky part comes with a hypothesis that is technically successful, albeit with a cost that mostly equals any error reduction.

In an ideal world, the results of your PDCA cycle would always be clear-cut. You would be able to continuously reduce error without worrying about the cost it takes to do so.

However, as has been proven, we’re not in a perfect world. If the resource investment for your hypothesis doesn’t produce results that could be considered worthwhile, it’s more practical to tweak your method to try and either get better results or reduce the resources required to implement the changes.

As previously stated, PDCA and PDSA are often mistakenly grouped together.

This couldn’t be further from the truth.

PDSA was created by William Edwards Deming (he called it “The Shewhart Cycle for Learning and Improvement”) with an emphasis on the theory behind any changes. He approached the topic with a scientific method.

PDCA, meanwhile, was an offshoot of Deming’s theory created by the Japanese in the 1950s. This focused on the reduction of defects and errors rather than pursuing or identifying a greater theory.

Deming himself condemned PDCA (at least, when used where PDSA was more appropriate) due to its focus on quality almost entirely through error and defect reduction.

The issue here is that PDCA is concerned with improving quality by reducing errors within a process or product. PDSA is instead geared towards the pursuit of quality no matter what that entails.

My colleague Adam Henshall went into beautiful detail on the topic in his article How to Use The Deming Cycle for Continuous Quality Improvement but, to summarise it here:

How to implement PDCA with Process Street

The key with any testing cycle (PDCA included) is to have a solid process backing it up.

You need to be able to follow the instructions of the test to the letter to avoid corrupting the results. Your team should have something to check their new method when implementing your hypothesis.

Most importantly, your testing process needs to be the same every time you run it to make it accurate.

That’s where Process Street comes in.

Process Street is a powerful piece of business process management software (BPM software) that lets you create super-powered checklists to manage your operations.

We even have a vast library of premade checklists that are ready-to-use to save you the effort of creating them! These are free to use and edit, so don’t worry if you need something more specific – our checklists can be used as a base to tweak to your needs.

Alternatively, you can create your process templates from scratch and take full advantage of our features.

Use image and video embeds to provide helpful examples while your text goes into detailed instructions. Set up form fields to capture information as your team works through their checklists. Use conditional logic and approvals to make checklists that adapt to the situation and enforce any required approval steps.

You can even use it to pandemic-proof your business!

Let us help you create a process so good that your team will want to do things right every time. Sign up for a free trial of Process Street today.

How do you reduce error? Do you have a different system for testing improvements? Let us know in the comments below!