We Analyzed 50 Tech Job Listings — Here’s What We Found 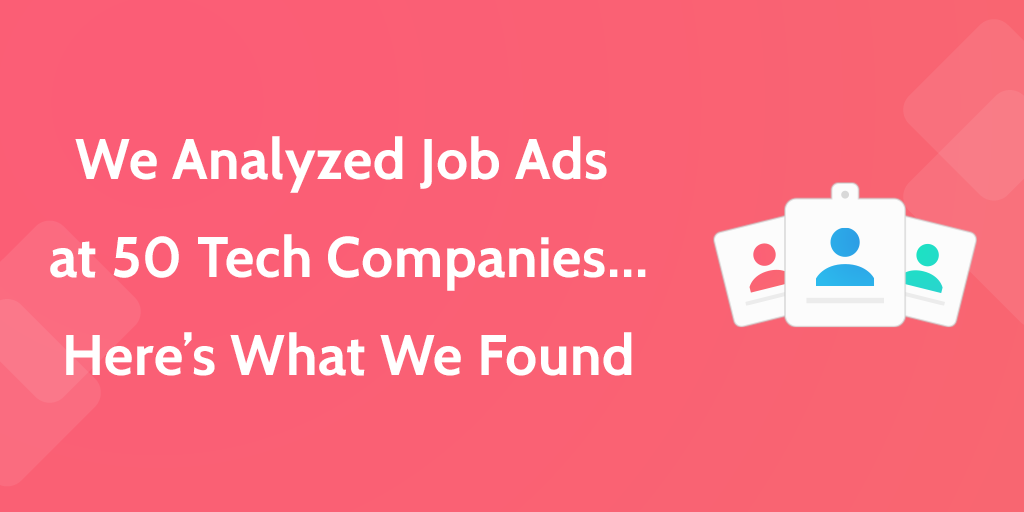 With legions of social activists paving the way, we’ve been dealing with the lack of workplace diversity in America for over a decade. And although you’d think that tech startups—with their productivity solutions and their open office spaces—would be at the forefront of the gender equality movement, the numbers tell a different story.

Before we start, here’s a quick overview of the findings:

‘Men are better at tech’ is a costly misconception

An overwhelming majority of 89% of software development positions are filled by men, despite the fact that Fortune 500 companies with at least 3 females in leading tech roles see 42% more return on their sales, and diverse teams see a 22% decrease in turnover rates.

Tech startups know there’s a problem, and some have announced that they’re actively trying to close the gender gap in tech. But it’s one thing to pay lip service to improve your Silicon Valley reputation, and another to actually take steps to improve gender diversity.

Acquiring a diverse workforce starts with a great job ad — something that tech hiring managers don’t put enough thought into.

A job ad isn’t simply a tool that employers use to find candidates. For the job seeker, it’s a small window into the inner workings of the company and culture. So if it inadvertently shows a gender bias or neglects to emphasize equal opportunity, that’s an immediate red flag.

To see how well startups are doing at attracting good candidates, we used the job-ad optimizer Textio. In an analysis of 50 startup job ads for software engineering positions, we found that a significant number of companies—whether they realize it or not—have gender-biased job posts, limiting the appeal of their job. In targeting only a fraction of the population, companies are missing out on the opportunity to find the absolute best candidate for the job.

Textio did a survey of over 10,000 job listings and found that the listings with certain keywords appealed to women, while men showed a preference for ads that had drastically different language. Based on this evidence, Textio tells you how your job ad ranks on the gender bias scale.

Job ads that appeal the most to women— the ones that are considered “feminine”— use language that’s community-oriented, emotional, and goal-driven. They include words like “teamwork,” “meaningful,” “foster,” and “transparency.”

Meanwhile, ads that drew more men, and considered “masculine,” revolve around independence, aggression, and leadership. These are words like “tackle,” “proven,” “experts,” and “world class.” 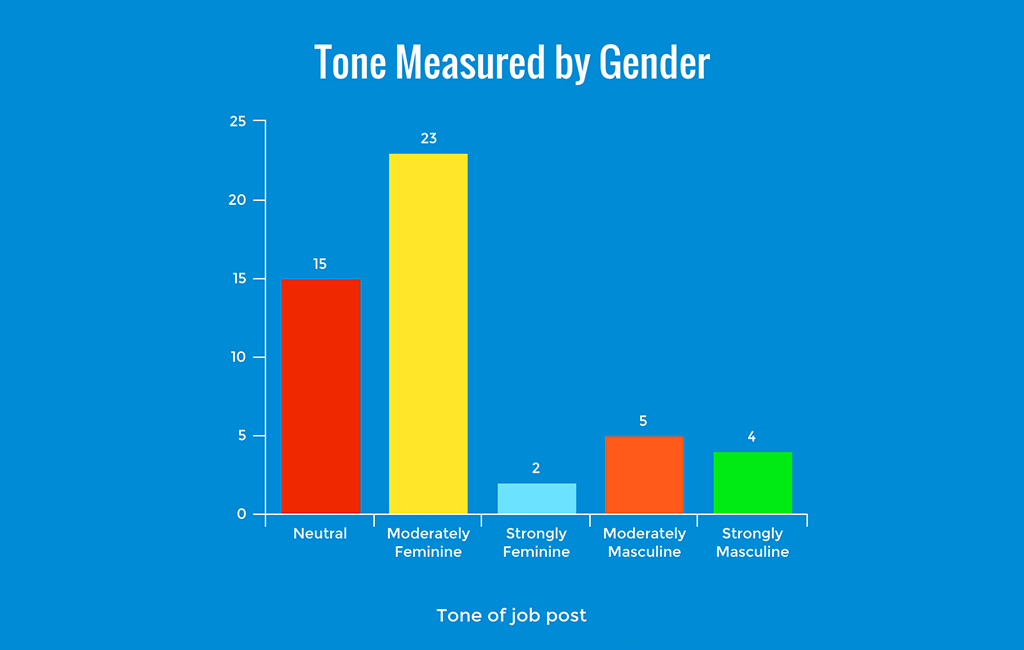 According to our study, only half of the job ads were neutral and unbiased towards a certain gender. About 50% of ads were determined to be feminine and about 18% were biased towards men. That’s 18% of companies that are shooting themselves in foot when it comes to finding the best candidate—and all before the hiring process even begins!

Confluent, the Big-Data startup created by the developers who built Kafka at LinkedIn, was one of the companies that ranked as extremely masculine. Take a look at their skills requirements section:

According to Textio, this ad will appeal much more to men than it will to women. While it is likely that Confluent chose this assertive language to show that they have high standards and are looking for the best workers, ironically, they aren’t reaching all of the best candidates—because they’re only appealing to the male ones.

Take a look at the masculine language they used to conclude their ad:

A simple rewording, however, can get the same message across without discouraging a big portion of the candidates before they even reach the starting line. Take a look at how this ad might be improved:

Confluent has tripled in size over the last 6 months, with aspirations of soaring growth across all functions in 2016. We’re looking for extraordinary people of all stripes, and we look forward to hearing from you!

The company is clearly interested in hiring “people of all stripes,” but a deeper analysis of their ad shows that they’re actually only attracting one gender, filtering out many excellent employees.

That means that targeting advertisements towards women is a win-win. Appcues, a company that focuses on improving user onboarding and engagement for SaaS companies, is one startup that has taken this approach. As a company that is currently only 20% women, they’re actively trying to promote an more inclusive environment, so that more women consider applying for their software engineering positions. Take a look at their ad for a front-end engineer:

By emphasizing a positive community and transparency, Appcues has created an ad that will strongly appeal to women. And in case they weren’t getting their message across, further down in the listing they use feminine pronouns to describe their ideal candidate:

By going against the convention of deferring to masculine pronouns, Appcues is showing their inclusivity—how they’re thinking that the position could very well be filled by a female. This way, Appcues is sure to find the best candidate, because their ad appeals to both genders.

In the 2014 report released by the Equal Employment Opportunity Commission, there were still 88,778 charges filed in the US, 29 percent of which were based on gender. But the EEO doesn’t just make gender discrimination punishable by law, it sets a standard for acceptable behavior. Any company that explicitly mentions the EEO is letting their employees know that they are not simply following the rules, but that they are committed to fair treatment of all employees. 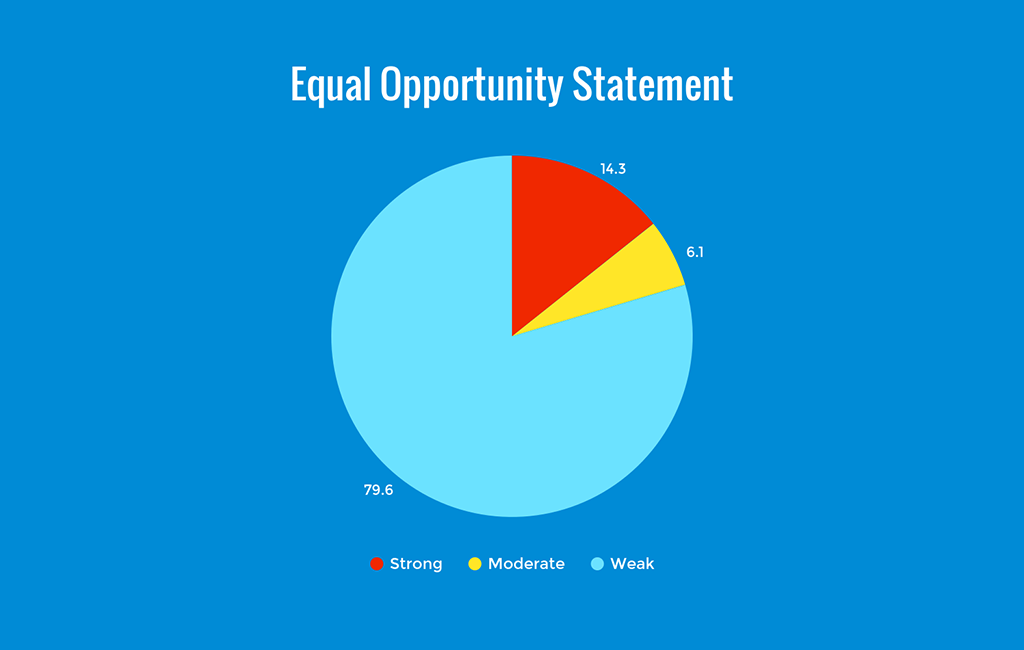 We found that while a few startups did make it clear that equal opportunity is a core value to their organization, others make no mention of it all. In fact, the majority of them did not include any kind of equal opportunity statement, drastically narrowing the appeal of the job.

Based on a study surveying 140,000 people, Payscale discovered that 75% of men believe that there is equal opportunity for men and women in the tech industry, while only 51% of women agreed. This means that it is likely that a hiring manager will underestimate the necessity of an equal opportunity statement.

And no matter who’s right—whether those biases exist or not—half of female applicants need to be assured that discrimination won’t be an issue at the startup they’re applying to.

While young startups try avoid corporate jargon, including an Equal Opportunity Statement is important to show that you are interested in promoting a healthy and diverse company culture.

Put an emphasis on diversity

The issue of the tech environment not being accommodating to women and minorities has been a sensitive issue. Slack software engineer Erica Baker wrote “Friends of mine (who will remain nameless) have left Apple because they were facing the same struggles surrounding working there that I felt at Google, that boil down to this: they didn’t feel included and didn’t feel like Apple really gave a damn about that.”

In order to appeal to all people—including those that have felt the effects of a non-inclusive environment, it is crucial for a startup to include a statement stressing the importance of diversity.

The email marketing startup MailChimp, for example, makes it very clear that they value equal hiring practices. Take a look at the disclosure at the bottom of their job listing for an email developer:

MailChimp is an equal opportunity employer, and we value diversity at our company. We don’t discriminate on the basis of race, religion, color, national origin, gender, sexual orientation, age, marital status, veteran status, or disability status.

Not only do they remind the applicant that they are an equal opportunity employer, but they also explicitly say that they value diversity. This ad represents the attitude of the team and the company, and it’s a clear indicator of their values. This will increase the chances that great applicants will apply to this job without any reservations about how the company treats employees.

Software engineers are the most in-demand professionals in the world, so it is not surprising to see job ad boards filled with engineering positions. It’s a buyers market. So narrowing the appeal of an engineering position at your company is the last thing you want to do, if you want to get the cream of the crop. Not to mention, studies have shown that gender-diverse companies are 15% more likely to financially outperform others in their industries.

Remember that a job ad is a potential candidate’s first exposure to your company. You are doing yourself and your team a disservice by alienating excellent candidates based on their gender.

So you might want to put more thought into your job ad next time around— you might be missing out on some great female employees, just because you’re set on using the phrase “world-class ninja.”

I search a lot of websites for the information about latest tech jobs then I found JobAds is the website providing great information about the Tech jobs and it can also provide Employment news it is very useful to Job Seekers.