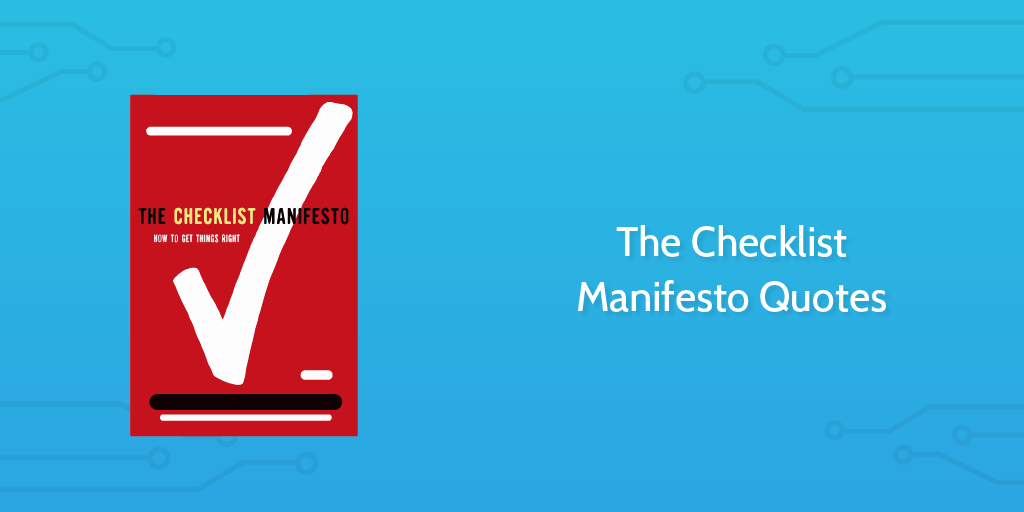 The most useful Checklist Manifesto quotes

He interviews professionals from the man responsible for foolproof checklists given to pilots flying incredibly complex Boeing airplanes to a group of high-powered venture capitalists. All the people in the book have something in common – they want to reduce risk. And Gawande himself, like every human being with a will to survive, is no stranger to risk reduction. For him, however, it’s vitally important.

The Checklist Manifesto is the story of how this simple checklist was made. Interview with a Veteran Checklist Writer

Taking inspiration from the flight checklists introduced for pilots in World War II, Gawande spoke to Daniel Boorman, an electronic checklist procedure manager at Boeing. It won’t come as a surprise that a man like that had a thing or two to say about how to create an effective checklist.

There are good checklists and bad, Boorman explained. Bad checklists are vague and imprecise. They are too long; they are hard to use; they are impractical. They are made by desk jockeys with no awareness of the situations in which they are to be deployed. They treat the people using the tools as dumb and try to spell out every single step. They turn people’s brains off rather than turn them on.

Good checklists, on the other hand, are precise. They are efficient, to the point, and easy to use even in the most difficult situations. They do not try to spell out everything—a checklist cannot fly a plane. Instead, they provide reminders of only the most critical and important steps—the ones that even the highly skilled professionals using them could miss. Good checklists are, above all, practical.

Trying not ‘seem like a kid who’d just been offered a chance to go up to the front of the plane and see the cockpit’, Gawande accepts the invitation to go into a complex Boeing flight simulator (with every airport in the world loaded into it) to try checklists in action.

Despite the safe simulator, the realism left his heart racing after a session of probably the most fun research ever.

The plane didn’t explode. We were safe. I wanted to give Boorman a high five.

The Philosophy of Checklists

After using Process Street for pre-publishing and content promotion checklists, it’s not like I need convincing how useful they are.

In the opening chapter of The Checklist Manifesto, Gawande explains exactly why checklists are necessary with information from a pair of 1970s philosophers writing in an essay that has been given new life thanks to the book.

Based in Gawande’s familiar territory, medicine, the essay, Toward a Theory of Medical Fallability, is an application of classical philosophical concepts for the modern world. The Checklist Manifesto quotes this enlightening passage:

Some things we want to do are simply beyond our capacity. We are not omniscient or all-powerful. Even enhanced by technology, our physical and mental powers are limited. Much of the world and universe is—and will remain—outside our understanding and control.

What the philosophers, Samuel Gorowitz and Alasdair MacIntyre, were trying to get at are the two reasons for human error: ignorance and ineptitude. Thanks to science, a lot of what we do has a rational explanation, so ignorance doesn’t count most of the time.

Ineptitude, where the knowledge exists but is applied incorrectly, is a far more modern problem. A problem that can be solved with checklists.

By the end of the book Gawande has made his case for checklists and doesn’t hesitate to celebrate how the Surgical Safety Checklist was a big success.

More than 250 staff members—surgeons, anesthesiologists, nurses, and others—filled out an anonymous survey after three months of using the checklist. In the beginning, most had been skeptical. But by the end, 80 percent reported that the checklist was easy to use, did not take a long time to complete, and had improved the safety of care. And 78 percent actually observed the checklist to have prevented an error in the operating room.

If you’re skeptical about checklists, go and give The Checklist Manifesto a read! Before reading this book and being hired by Process Street I didn’t have much of an idea why checklists mattered or why they were more useful than notebooks.

The human brain needs a rational process or it will give in to the natural tendency to wander off in another direction. How many times have you found yourself on Twitter when you should be doing something else entirely? Telling yourself it’s ‘research’ doesn’t count.

There is no other choice. When we look closely, we recognize the same balls being dropped over and over, even by those of great ability and determination. We know the patterns. We see the costs. It’s time to try something else.

If you enjoyed The Checklist Manifesto, take a look at our checklist software, built on the principles of the book and sign up for a free account. If you haven’t read it yet you can find the book on Amazon here.

Process Street encourages you to keep your processes scheduled and make them customizable for task variations by using recurring checklists and templates.

What is your favorite quote from The Checklist Manifesto?