Task Management Techniques: 7 Lists To Get Shit Done On Time 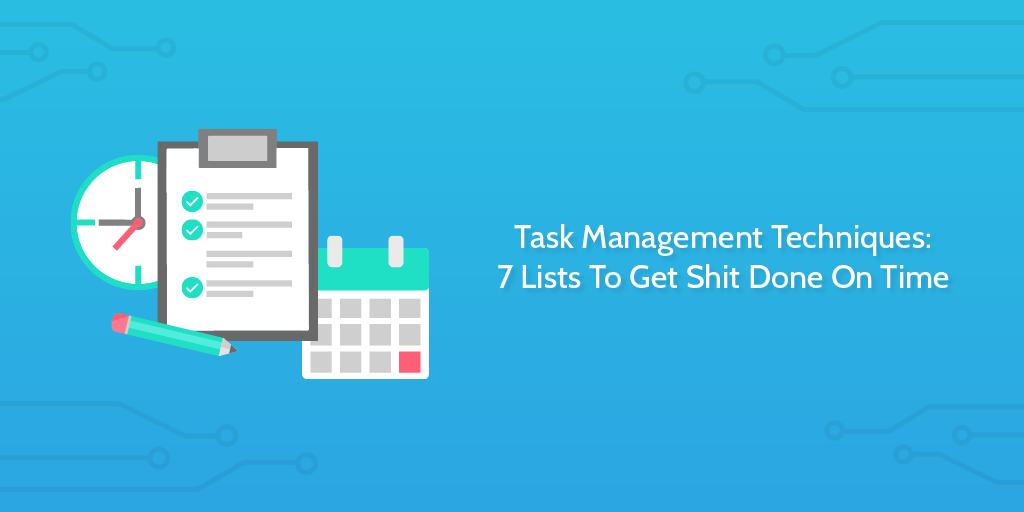 Maybe you’re the sort of person who sits down at their desk for 8 hours solid and hammers out as much as possible.

Maybe you use the Pomodoro method or your own task management techniques.

I don’t know what sort of person I am yet.

I used to give it no thought — wake up, lob a coffee down my throat, sit down and start typing.

Lately, my tasks are harder to define and I find myself having trouble with time management and prioritizing.

Right now I’m using Pomello, a Pomodoro timer that lives in Trello and times my work on each card. Click here to get it.

In my seemingly neverending quest to get shit done, I’ve seen a ton of strange methods and lists. And, let me tell you, working at Process Street — a task management system for businesses — I’m making myself practice what I preach.

Here are some of the task management techniques I’ve come across.

The first step: Brain dump! Note down everything you can think of that needs doing at some point. Once you’ve done that, here are some ways to organize them.

The 6 box to-do list helps you focus on your most important tasks by organizing them into the top 5 and then having a separate box for everything else.

This is a good list if you find yourself putting equal time and effort into urgent and non-urgent tasks. Here, the non-urgent tasks are all 5 times less important because of the way they’re structured on the page. It also means you’re not forgetting about your lower priority tasks altogether, you’re just putting them on the back burner. 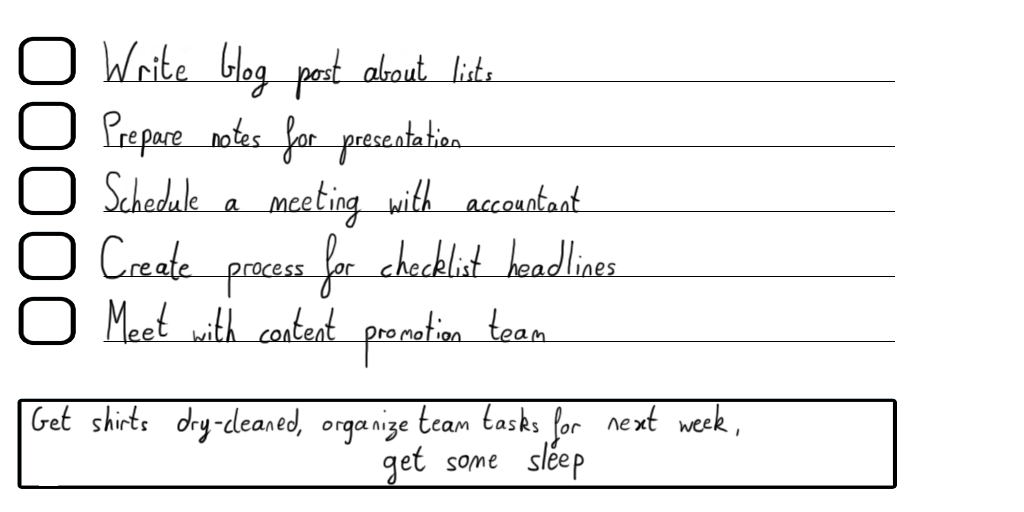 If you enjoy filing reports, look forward to processing the Promotions tab in your inbox and can’t wait to get a spare minute to tag all 500 untagged Evernote notes, this list could be the next big thing in your life.

The lettered (ABC) section of the list tells you how much damage a task will do to you if it’s left unfinished.

An ‘A task’ could be finishing off a big project that your boss has been waiting on or a presentation you’ll give this afternoon.

A ‘B task’ is something you can’t avoid doing but doesn’t have much riding on it. It could be organizing your team’s task list for next week.

‘C tasks’ are things which will need doing eventually but effect nothing if they aren’t done. This could be something like cleaning your garage or buying that new watch you like.

Letters show you how important a task is, but not how urgent it is. Numbering a task 1 (for example, 1A) shows that it is the most important of its lettered category. Numbers denote urgency and letters denote importance. That’s probably confusing, so here’s an example: 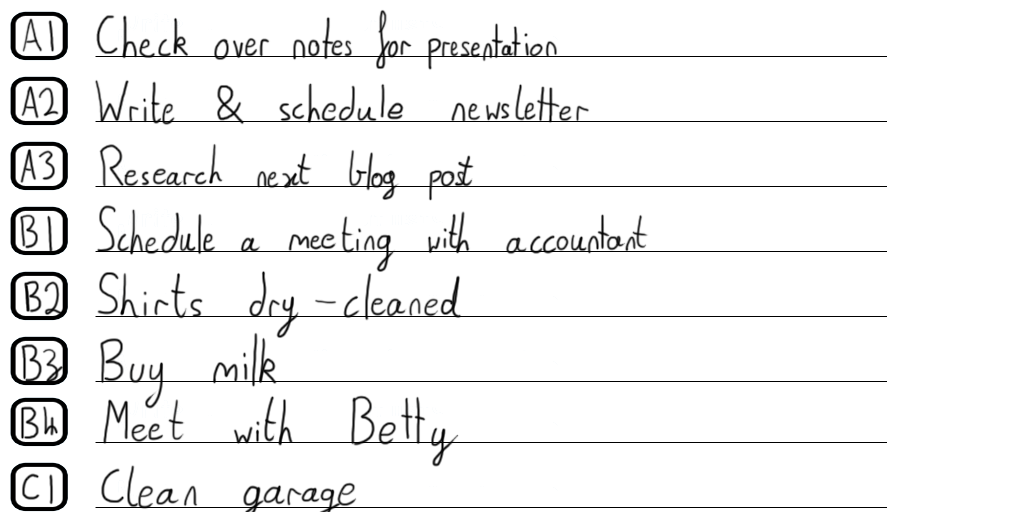 Labels and lists on Trello

If you keep a task list in Trello like I do, it can be difficult to figure out what to do. My task list has hundreds of cards in various lists, and could be overwhelming if it wasn’t properly organized.

Each morning, take 5 minutes to go through your tasks and label the ones that are more urgent than the rest with a red label. Trello’s filtering feature allows you to show only cards with red labels.

This might work for you, but if it doesn’t there’s another way. If you use Trello like I do, with columns for Upcoming, Doing, Waiting Approval and Done, you can add a Priority list and organize them by priority by putting the most urgent cards at the top.

To-do lists don’t work for everyone. The sorts of people who get stressed out by big lists of unfinished tasks are the sort that would get more value from a done list. It’s like the process of elimination — you know what’s already done (and can see it there in all its glory), so know what to focus on next.

An example of a done list used frequently in business (particularly when managing developers) is the agile reporting system:

Walter Chen of iDoneThis brought this to my attention, and his article, The Power of the Done List made me realize I already have one. It’s the last list on my task board on Trello, where I proudly move cards that have been thwarted by my superior task management skills.

If you’re the sort of person who likes artificial constraints, you’ll love this! You probably have a task list a mile long, but, unfortunately, there are only so many hours in the day. Take that terrifying list of 20 ‘urgent’ tasks and pick just FIVE that you’re going to work on.

This is a lot like the 6 box method I mentioned earlier, but it’s for people who have a tougher time focusing. Instead of demoting your less urgent tasks to the 6th box, you cut them altogether and refuse to acknowledge their existence until you simply must do it.

Ah, the four Ds. Managers will like this one because it’s a way to organize yourself and others.

When faced with a hefty list of tasks, it’s easy to forget that most of the time you could delegate the fiddly, time-consuming ones elsewhere. And the ones you have to do yourself can be added to separate lists, in order of priority.

Deferring is a form of task snoozing, a feature I’d recommend from Any.do Moment, a task management app for Android and iOS, which lets you snooze a task (pause it for now, get notified again later).

Is there one task in particular that you’re always putting off? Drop the sucker. Tidy things up, and make it easier for yourself in the future. Multiple lists can be organized with Trello, as I’ll tell you until I lose my voice or mind.

Every Monday I have a set of tasks to process as a morning routine. I could do them on Tuesday, or Friday, but I’ve chosen to get them all out of the way right at the start of the week. For this purpose, I use Process Street to create a template — the basis for a checklist that I can use over and over again — then set it up so it creates a new one every Monday.

For example, this week I had a checklist called ‘Monday Tasks – 16th November’. I got an email reminding me that it’s time to get started on them, and I worked through the list before getting on with anything else. Here’s how the process could look: 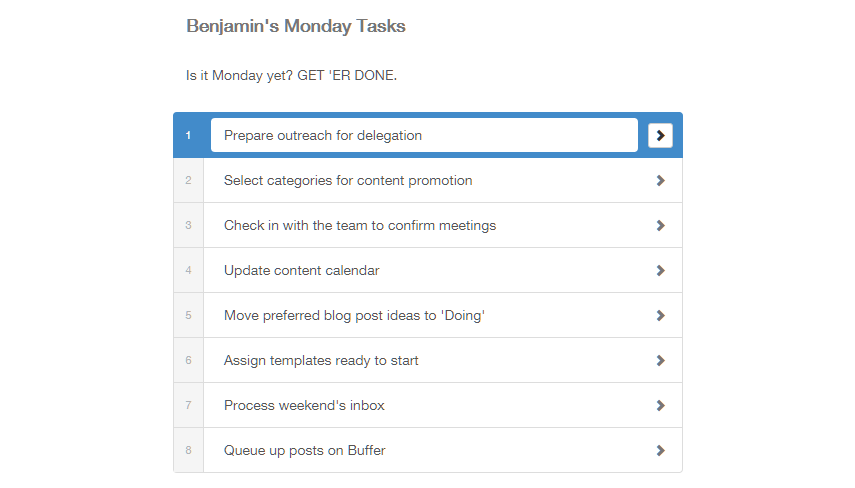 To schedule a checklist, click the template and then use the drop-down menu next to ‘Run checklist’ to select the scheduling function. 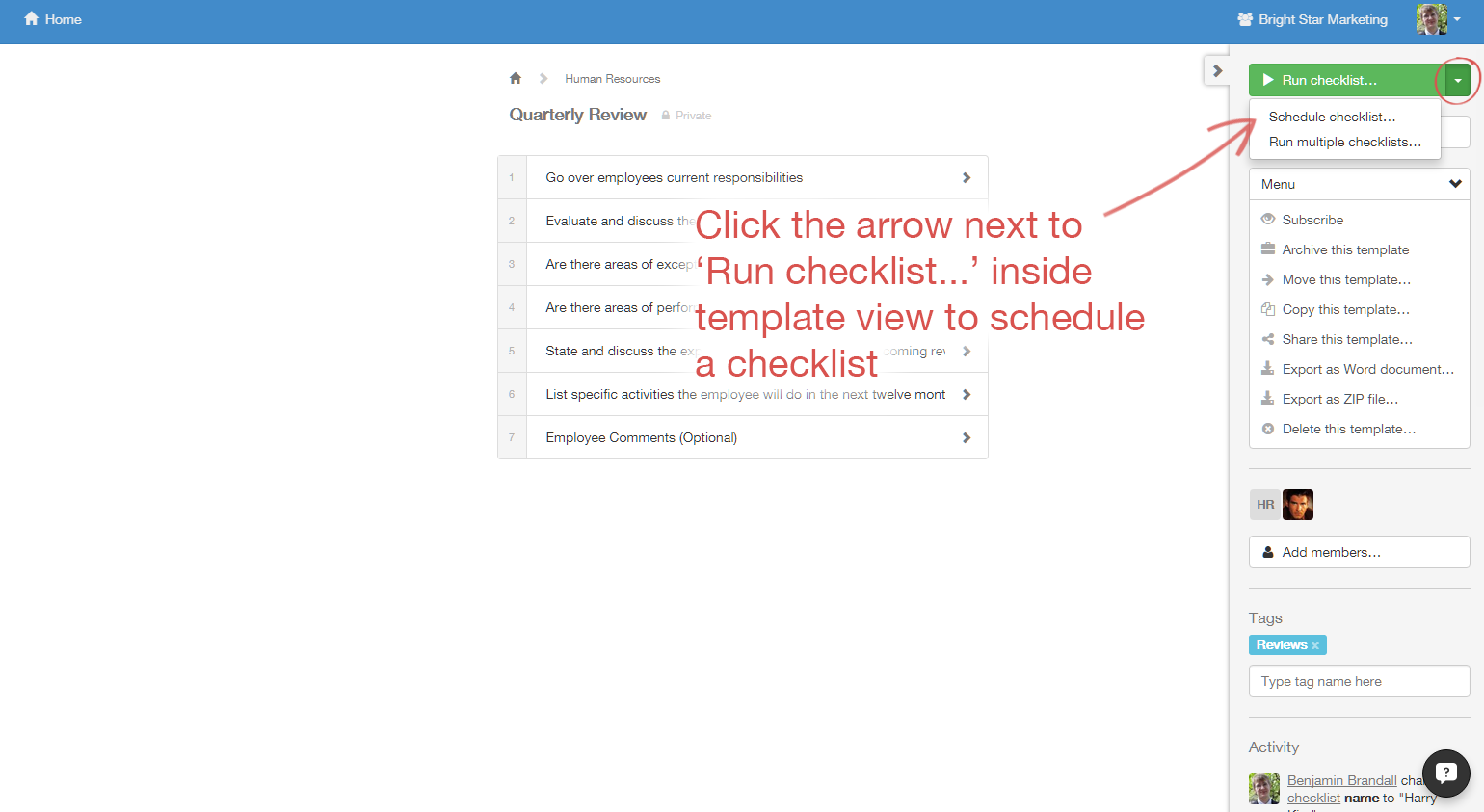 For more information, check out our help site. 🙂

So, there you have it.

Eventually, I settled on using Trello with a ‘Priority’ list and the Pomello add-on to track my tasks with a timer. However, I also have my eye on TaskPaper and a whole host of other checklist apps.

And if even I’ve managed to pull myself together, there’s got to be something that fits your daily routine and workflow in there.

Good luck, and let me know in the comments if you’ve got more task management techniques that I’ve overlooked (or to tell me how much shit you just got done thanks to this).

I am new to Process St and surprised by this post as I was thinking the PS could replace my need to use Asana … Am I understanding your post correctly?

Actually, Process Street could either be used in place of Asana or together with it. Process Street is for tracking your recurring task progress. So, for example, when you’re getting a new employee set up you might need to

1. Collect their data
2. Send them a welcome email
3. Add them to your Slack, Trello, give them login credentials
4. Etc.

Process Street lets you create repeatable checklists for these kinds of tasks, and links to other apps so when the box is checked, it executes the step. So, for step 1, if you were to enter data into a Process Street checklist you could automatically push that data to a spreadsheet or a CRM.

As for linking it to Asana, you could set a rule up that says “whenever I add a task with a certain task to Asana, run a checklist from a certain template in Process Street”.

Does that clear things up for you?

Just wandering if you use any Zaps between Trello & Process Street?

Hi there 🙂 Thank you for the article – My best idea how to get shit done: start something – no matter how far it gets you, it is always further than before. I often use digital tools likewise kanbantool.com – just to make sure that all the tasks will be done correctly and on time. Kanban helps me very much to control everything 🙂 Thank you for the article – it is very helpful, especially for people who have a hectic life..

I’ve never found anyone who could explain things I’ve never been able to. Now that I am trying to organize my life, house, business, kids etc I have lists on lists on lists! I feel lost and very overwhelmed sometimes but nobody seems to get it or care sometimes. It’s cool af to read the way you explained the racing of the brain and all that on top of struggling to focus. People in my world just don’t fully understand that. Unfortunately my kids all suffer from depression and their own adhd/ocd anxiety. Learning more helps! Thanks

I remember reading an article for ADHD people who if doing a task list to do list thing but not on your phone this works great but I want one that work on my phone so that’s what I’m looking for here anyway so you put all your tasks each on their own post it note. Keep it by simply. Every little step is it’s own post it. Have them all laid out on front of you on half of v the area youre lookimg at in front of you. Didn’t the other half of that area is where you drag and drop each posted according to which one you really need to do for the day. n one side of the board or whatever in front of you and you look at all this little tasks and you pick out the ones that are the most important ones and your drag and drop them over onto the blank side of the space…. so that way when you have those three or whatever you want to focus on only but all the other ones are still there in the list for you to pick up tomorrow or whenever but then you don’t get nothing on today’s list they’ll automatically fall back in the pile of of all the things to do that’s what I really want is there an app from anyone knows of please let me know!! The drag and drop feature is kind of a major one for me and being able to see all of the tasks on one side and then just r lines to focus on now, next to it, and then make them all fall back on to the beginning task list if I don’t get them done by end of day… And the ability to attach reminders, alarms, repeating, etc too any task….