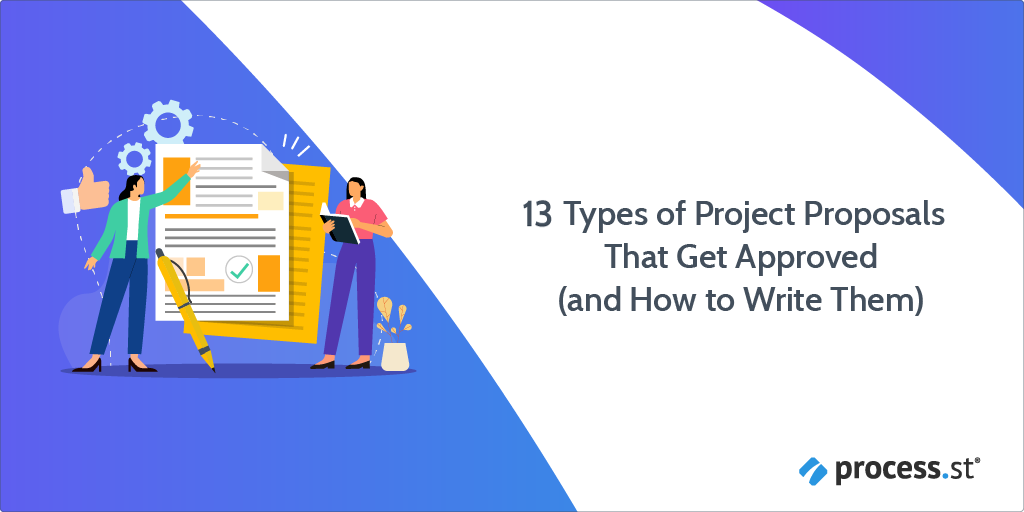 Project proposals are how you can get management to act on your ideas. They’re the bottom-up version of a project request form.

Writing a project proposal isn’t rocket science, but it is a lot harder if you don’t have something like a template to give you a head start.

Using a template for your proposals gives you a document which you can reference throughout the entire project. It’s a great example of effective business process management – the proposal acts as a banner that your whole team can rally around to ensure you’re all working towards the same goal.

So, in this Process Street post, I’ll go through how to create a project proposal, that gets approved, by going through the following topics:

Ready to get started?

If you’re in a hurry, and you need a simple, effective project proposal template you can pick up and use immediately, then we have what you’re looking for right here.

You can also find the same project proposal template embedded just below.

Template: How to write a project proposal

If you’re in need of a more specific template, we also have a bunch of other project proposal templates below, for pretty much any kind of project proposal use case you could think of. Just click the header to expand it and see the full workflow template.

🥅 What’s the goal of a project proposal?

The goal of a project proposal is to communicate your project’s core value proposition to an interested party. It should establish the scope of the project, including expected outcomes, and how you plan to execute it. It also serves as a roadmap that defines each step of the project, so that everyone involved is on the same page, working towards the same goals from the start.

One of the most important things about a project proposal, but one that is often forgotten, is that project proposals should serve to convince whoever you’re proposing to that the project is worthwhile. That could be an investor, a C-level executive, or even your teammates (buy-in from your team is always important, after all).

That’s why getting inside the heads of the people you are writing the proposal for is vital; you need to think like the project’s stakeholders to deliver a proposal that meets their needs.

In other words, the goal of a project proposal is to get approved.

🎯 What makes a good project proposal?

The best kind of project proposals, the ones that knock it out of the park and convince everyone on the recieving end of the presentation that this is something worth investing time and money in, are the ones that:

There are two stages to the creation of an effective project proposal:

Planning a good project proposal looks something like this:

Don’t worry too much about the language you’re using or being terribly well-formatted here. Instead, focus your attention on getting the base facts right and covering yourself for any questions that might counter your proposal.

When it comes to writing a proposal, your structure should look something like this:

I’ll cover each section & give advice while showing & referring to an example project proposal.

Specifically, I’ll be looking at this proposal for an assessment of a nuclear waste storage site.

🤖 Writing a lot of project proposals? Check this out!

If you’re finding yourself writing a lot of project proposals, it might be time to consider building a process for writing them to make your life easier.

In fact, if you’re writing a lot of project proposals, you already have a process (even if you don’t know it yet). And you can always improve your processes & workflows to do smarter & better work.

That’s what we’re all about at Process Street: Helping you build powerful workflows that automate repetitive tasks and manage team knowledge, so that you can focus on the work that matters (and empower your whole team to do the same).

Check out this video to find out more about who we are and what we do:

With our advanced features, you can customize your project proposal templates so it fits your organization, the type of proposal you’re writing and your way of working like a glove:

Not only that, but you can connect to thousands of apps through Zapier, webhooks, or API integration to automate your workflows and save time, effort and money.

You can use Process Street to create a process for all sorts of things, not just writing project proposals. From creating client onboarding processes and to-do list templates to managing your quality management software or standard operating procedure templates.

To give you even more help and guidance, check out these alternative proposal templates that you can use when writing your project proposal:

Let us know how you organize your project proposals in the comments below!

Thank you! This is gold! I was looking for a resource like this for years! You rock!

This is awesome can waiting for a long time. Thanks

Thanks ! This is what I was looking for

This is great and coherent staff

This is awesome? Thanks Ben

I really appreciate this piece of work. So reliable.

Thank you so much for this article. Your practical examples make everything clear and simpler. Thank you again!

Thank you for your help and this was very informative

this page is nice

thanks Ben its something I have been searching for

Thanks for this wonderful work. It is so important to me and my career. I wish every documents will be sent to my box.

you’ve given me a very good kick start thank you

Thank Ben your project proposal format is awesome; can you give me one example of petroleum proposal writing.

The best coverage. This is what i was looking for. Thank you very much.

Thanks so much for these detailed information, they are very much useful to me. Thank you once more.

This was great to read…

thanks four your programme,it is so important to me as a project officer.i really learn a lot.

great,i really learned a lot from your program me.

In the process of trying to raise funding for an innovation and production company.

This is great, very helpful. thank you

wowww: thanks soo much

I am John Kall Chacha from Tanzania, East Africa. i am thanking you so much to get this document. But not enough, i am still in need of a sample for the written project proposal for community development, farming and environmental protection (tree planting).
we have been trying to look for financial resource to accomplish our projects targeting to alleviate poverty and overcome food insufficiency caused by drought but in vain. This may be lack of proposal writing skill. So please assist.

Thanks for this excellent information

Thank you very much for this… it’s an awesome resource. Highly appreciated, keep the good work.

Very great, a gold set up and l love it.
Is there any for to apply for construction company set up?

Hey Ivan, I recommend checking out this article which has a selection of construction-related processes: https://www.process.st/construction-templates/

I hope this is helpful!
Adam

Very clear and smooth ideas aabout the types of proposal for the learners. Thanks a lot.

Glad you found it helpful, Bikash.

Thanks
Been in search of this and coming across this put me on the right path to getting my proposal done.