How Asking ‘Why?’ 5 Times Can Potentially Save Your Business (Free 5 Whys Template) 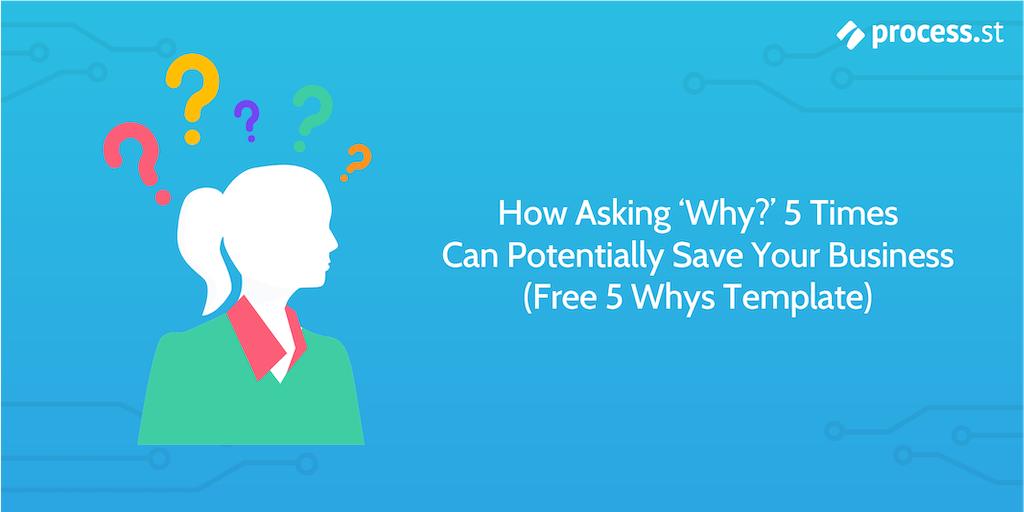 Business-related problems not only crop up constantly, but they can also have massively negative impacts if not resolved promptly.

In fact, problems related to cash flow are why 82% of small businesses fail.

The good news is there’s a nifty way to get to the bottom of roadblocks quickly: 5 Whys.

According to Sakichi Toyoda, the founder of Toyota Industries and inventor of 5 Whys, asking ‘why?’ 5 times can help you get to the root cause of the issue or problem you’re facing.

In this post, you’re going to learn more about the 5 Whys process, why it’s so beneficial, and you’ll even get your hands on a 5 Whys template, courtesy of Process Street.

Read through these sections to get the complete lowdown:

So, why are you waiting around?

It’s time to become a pro at finding out why problems occur! 🔍

5 Whys is an iterative problem-solving process that aims to get to the root cause of an issue or problem by asking ‘why?’ 5 times.

First, you state the issue/problem you’re facing, and ask ‘why?’ – why did the issue or problem occur? Then, you ask ‘why?’ four more times, with each question of ‘why?’ in response to the last answer you gave.

Take this example given in Stephen Spear‘s book The High Velocity Edge, where the initial problem is that a car won’t start:

Considering this high-value process takes hardly any time at all and can uncover the cause of pesky problems, here’s Process Street’s own 5 Whys Checklist Template for you to dive straight into.

What is 5 Whys’ history?

Back in the 1970s, the Toyota Motor Corporation needed to evolve their manufacturing methodologies and processes so that they could create products harder, better, faster, stronger.

Because they had narrowly avoided bankruptcy and were facing stiff competition from the likes of Nissan and Honda in the east, and Ford and General Motors in the west.

Sakichi Toyoda, a Japanese inventor, industrialist, and founder of Toyota Industries originally came up with the 5 Whys process in the 1930s, but it wasn’t until Taiichi Ohno, the architect of the Toyota Production System, took Sakichi Toyoda’s 5 Whys process and introduced it internally – and in a widespread way.

Due to the successfulness of 5 Whys getting to the core of problems – and providing the team with opportunities to implement countermeasures – the 5 Whys process then became a prominent, permanent fixture within Toyota.

By the 1980s, Toyota became one of the best-selling car brands in the world.

Sure, there were multiple elements that contributed to Toyota’s global success, from being able to produce cars more cheaply than other countries to effective marketing strategies. From a manufacturing standpoint, however, 5 Whys surely must’ve helped Toyota to tackle issues they had head-on, thereby helping them to create, build, and ship out stellar cars!

In the contemporary business world, 5 Whys is still widely used on its own or in conjunction with other business-related frameworks, techniques, and practices, such as Six Sigma, Kaizen, and lean manufacturing.

Although 5 Whys was created over half a century ago, it’s certainly passed the test of time.

How is the 5 Whys process beneficial?

The reason why 5 Whys (pun intended) has passed the test of time is due to the positive benefits that it brings.

As mentioned before, 5 Whys helps people get to the bottom of their roadblocks, both in business and wider life. But it’s worth mentioning again, as this is the biggest pro that 5 Whys brings! No more staring at a screen for hours upon hours, wondering ‘why?’. No more having to put up with a problem or issue because you weren’t sure how to tackle it. The 5 Whys process helps you become a pro at uncovering – and then solving – problems.

In some cases, all it takes is one question of ‘why?’ to get to the root cause. But for many scenarios – and especially ones that are more complex – it takes an iterative series of questions to truly understand why an issue is occurring. By asking those additional questions, not only can the root cause be uncovered, but it’ll also show you the relationship between the problem and the cause. This means you can clearly see the ways every step interacts with another, helping you get the full picture of why and how an issue or problem has transpired.

Let’s face it: Business frameworks, techniques, and practices can be a little confusing to get to grips with at times. But with the 5 Whys process, that certainly is not the case. In fact, it’s a piece of cake to learn and do yourself, no matter if you’re in a managerial role or you’re an intern!

5 Whys isn’t some process you do once and never undergo again. Each time you or your team stumble across an issue where the root cause (and the countermeasure to put in place) isn’t clear, you can run those problems through the 5 Whys process. No matter whether you use 5 Whys immediately when an issue or problem crops up, or you dedicate a certain day each month to run multiple 5 Whys processes for lingering issues and problems, 5 Whys is highly repeatable.

If the above list of benefits has piqued your interest, then remember we’ve made a template for the 5 Whys process you can make immediate use of!

In the next section, you’ll be given a quick tour of the template, and information on how to use it.

Process Street’s 5 Whys template is pretty nifty, if I do say so myself. (Full disclaimer: I made it.)

But how does it work, exactly?

First, you’ll want to confirm basic information. This includes your name and email, the person you report to’s name and email (so they can approve the countermeasures you suggest later on), and the issue or problem you’re facing. 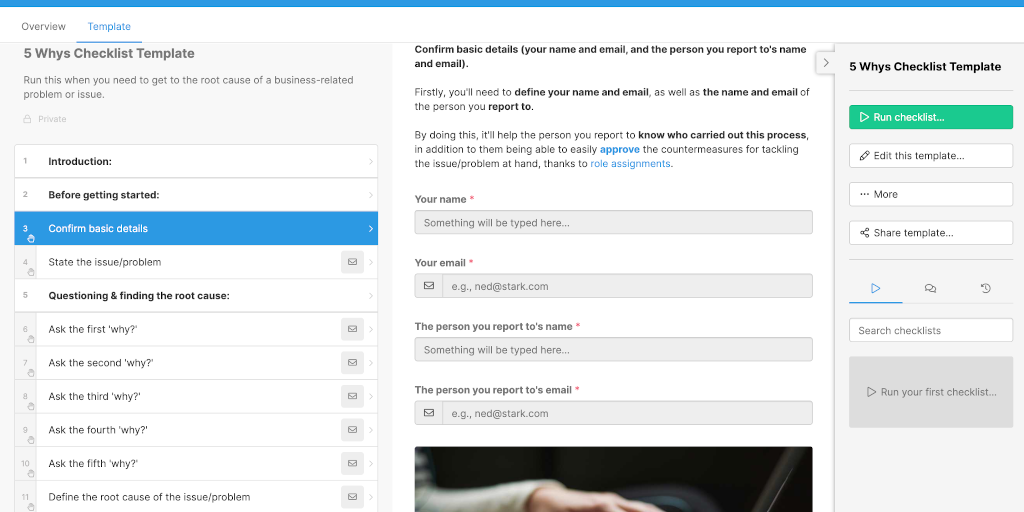 Then, you ask the iterative 5 ‘whys?’. The tasks included in the checklist will help guide you through this process efficiently and effectively.

Once you’ve gotten to the root of the issue or problem, in task #13 you’ll suggest up to 3 countermeasures to put in place, so that you don’t run into the same issue or problem in the short-term and long-term.

(In task #13, variables will pull through the text you entered for “What is the issue/problem at hand?” and “What’s the root cause of the issue/problem?”, so you can properly ruminate on the appropriate countermeasures.) 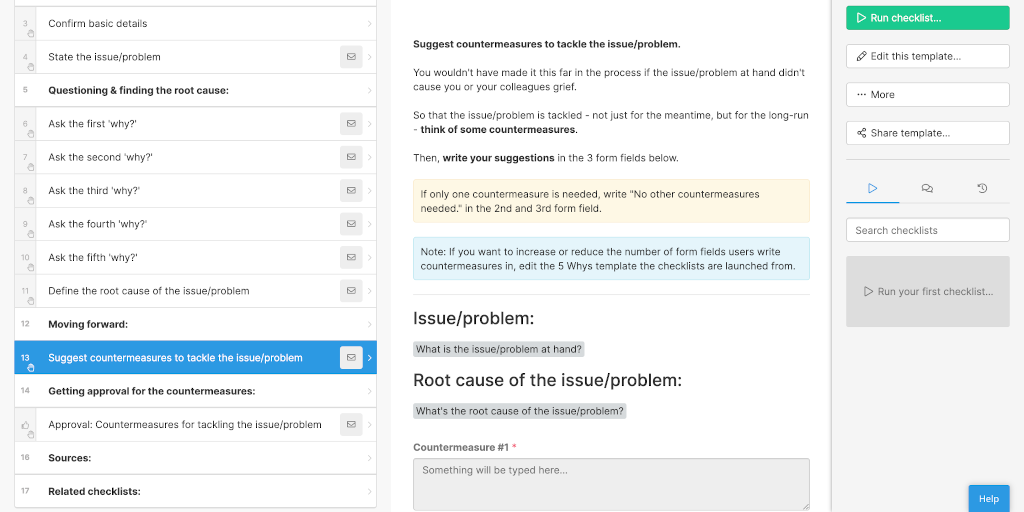 After you’ve completed the task, the person you report to will be automatically notified that there’s a task for them to approve: The countermeasures suggested by you in task #13. 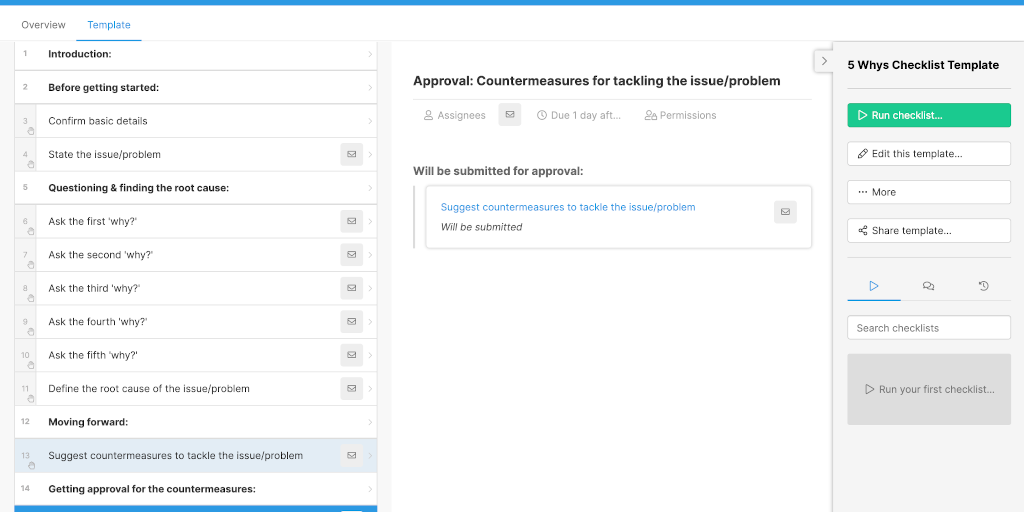 Once the countermeasures are approved – be it on the first go or after a few iterations – the checklist has been completed; you’ve found the root cause and figured out how to tackle it. All that’s left for you to do now is put those countermeasures into action!

Basically, Process Street makes the 5 Why process even simpler.

In fact, every business process can be as straightforward and easy with our state-of-the-art BPM software… ⬇️

Improving & taking control of your business with Process Street!

As you document workflows, business processes, and integral procedures as templates, you and your team can then launch an infinite number of checklists to ensure you go about those processes the right way.

What makes our checklists different from run-of-the-mill checklists, though, is our incredible workflow features:

Stop tasks, dynamic due dates, role assignments, and approvals have all been baked into our 5 Whys Checklist Template. But there’s no limit on how many workflow features you can add to your templates – the more the merrier!

These features will enable your teams to complete their recurring tasks and processes in a fun, fast, and faultless way.

At Process Street, we relish being a helpful bunch.

That’s why, before I wrap this post up, I want to share several extra templates and blog posts so you can better and improve your business.

The templates featured below involve FMEA, VRIO, SWOT analysis, and SMART goal setting, ensuring your business can be the absolute best it can be.

Click here to get the FMEA Template: Failure Mode and Effects Analysis.

Click here to get the SMART Goal Setting Checklist.

We’ve also got a ton of reading material from our blog for you to sink your teeth into:

There you have it.

Armed with our 5 Whys template, your shiny new Process Street account, and some stellar blog posts to read, you’re ready to ensure your business thrives.

Here’s to solving problems with processes and tackling uncertainty.

Have you tried the 5 Whys process before? If so, what did you think of it? And do you still use it? I’d love to hear your thoughts in the comment section below! 💡 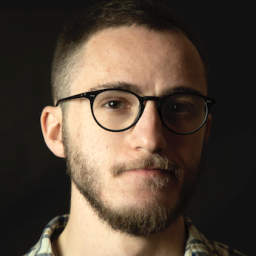